We analyse the implications of the Planck data for cosmic inflation. The Planck nominal mission temperature anisotropy measurements, combined with the WMAP large-angle polarization, constrain the scalar spectral index to be ns = 0.9603 ± 0.0073, ruling out exact scale invariance at over 5σ.Planck establishes an upper bound on the tensor-to-scalar ratio of r< 0.11 (95% CL). The Planck data thus shrink the space of allowed standard inflationary models, preferring potentials with V''< 0. Exponential potential models, the simplest hybrid inflationary models, and monomial potential models of degree n ≥ 2 do not provide a good fit to the data. Planck does not find statistically significant running of the scalar spectral index, obtaining dns/ dlnk = - 0.0134 ± 0.0090. We verify these conclusions through a numerical analysis, which makes no slow-roll approximation, and carry out a Bayesian parameter estimation and model-selection analysis for a number of inflationary models including monomial, natural, and hilltop potentials. For each model, we present the Planck constraints on the parameters of the potential and explore several possibilities for the post-inflationary entropy generation epoch, thus obtaining nontrivial data-driven constraints. We also present a direct reconstruction of the observable range of the inflaton potential. Unless a quartic term is allowed in the potential, we find results consistent with second-order slow-roll predictions. We also investigate whether the primordial power spectrum contains any features. We find that models with a parameterized oscillatory feature improve the fit by ∆χ2eff ≈ 10; however, Bayesian evidence does not prefer these models. We constrain several single-field inflation models with generalized Lagrangians by combining power spectrum data with Planck bounds on fNL. Planck constrains with unprecedented accuracy the amplitude and possible correlation (with the adiabatic mode) of non-decaying isocurvature fluctuations. The fractional primordial contributions of cold dark matter (CDM) isocurvature modes of the types expected in the curvaton and axion scenarios have upper bounds of 0.25% and 3.9% (95% CL), respectively. In models with arbitrarily correlated CDM or neutrino isocurvature modes, an anticorrelated isocurvature component can improve the χ2eff by approximately 4 as a result of slightly lowering the theoretical prediction for the ℓ ≲ 40 multipoles relative to the higher multipoles. Nonetheless, the data are consistent with adiabatic initial conditions. 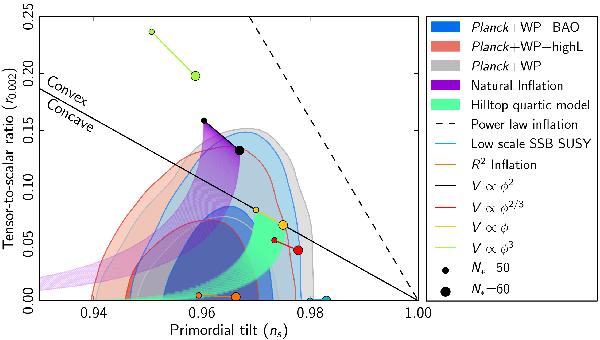