Planck 2013 results. I. Overview of products and scientific results

The European Space Agency's Planck satellite, dedicated to studying the early Universe and its subsequent evolution, was launched 14 May 2009 and has been scanning the microwave and submillimetre sky continuously since 12 August 2009. In March 2013, ESA and the Planck Collaboration released the initial cosmology products based on the first 15.5 months of Planck data, along with a set of scientific and technical papers and a web-based explanatory supplement. This paper gives an overview of the mission and its performance, the processing, analysis, and characteristics of the data, the scientific results, and the science data products and papers in the release. The science products include maps of the cosmic microwave background (CMB) and diffuse extragalactic foregrounds, a catalogue of compact Galactic and extragalactic sources, and a list of sources detected through the Sunyaev-Zeldovich effect. The likelihood code used to assess cosmological models against the Planck data and a lensing likelihood are described. Scientific results include robust support for the standard six-parameter ΛCDM model of cosmology and improved measurements of its parameters, including a highly significant deviation from scale invariance of the primordial power spectrum. The Planck values for these parameters and others derived from them are significantly different from those previously determined. Several large-scale anomalies in the temperature distribution of the CMB, first detected by WMAP, are confirmed with higher confidence. Planck sets new limits on the number and mass of neutrinos, and has measured gravitational lensing of CMB anisotropies at greater than 25σ. Planck finds no evidence for non-Gaussianity in the CMB. Planck's results agree well with results from the measurements of baryon acoustic oscillations. Planck finds a lower Hubble constant than found in some more local measures. Some tension is also present between the amplitude of matter fluctuations (σ8) derived from CMB data and that derived from Sunyaev-Zeldovich data. The Planck and WMAP power spectra are offset from each other by an average level of about 2% around the first acoustic peak. Analysis of Planck polarization data is not yet mature, therefore polarization results are not released, although the robust detection of E-mode polarization around CMB hot and cold spots is shown graphically. 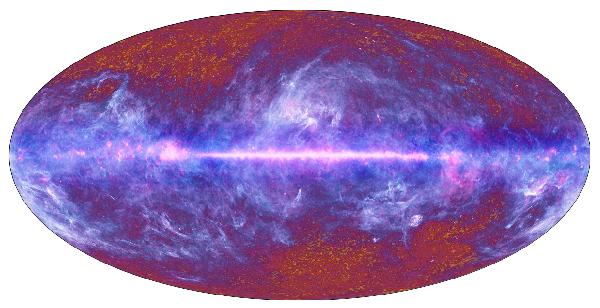