GASP. IV. A Muse View of Extreme Ram-pressure-stripping in the Plane of the Sky: The Case of Jellyfish Galaxy JO204

In the context of the GAs Stripping Phenomena in galaxies with Muse (GASP) survey, we present the characterization of JO204, a jellyfish galaxy in A957, a relatively low-mass cluster with M=4.4× {10}14 {M}⊙ . This galaxy shows a tail of ionized gas that extends up to 30 kpc from the main body in the opposite direction of the cluster center. No gas emission is detected in the galaxy outer disk, suggesting that gas-stripping is proceeding outside-in. The stellar component is distributed as a regular disk galaxy; the stellar kinematics shows a symmetric rotation curve with a maximum radial velocity of 200 km s-1 out to 20 kpc from the galaxy center. The radial velocity of the gas component in the central part of the disk follows the distribution of the stellar component; the gas kinematics in the tail retains the rotation of the galaxy disk, indicating that JO204 is moving at high speed in the intracluster medium. Both the emission and radial-velocity maps of the gas and stellar components indicate ram-pressure as the most likely primary mechanism for gas-stripping, as expected given that JO204 is close to the cluster center and it is likely at the first infall in the cluster. The spatially resolved star formation history of JO204 provides evidence that the onset of ram-pressure-stripping occurred in the last 500 Myr, quenching the star formation activity in the outer disk, where the gas has been already completely stripped. Our conclusions are supported by a set of hydrodynamic simulations. 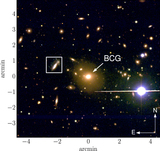