The ACS LCID Project. IX. Imprints of the Early Universe in the Radial Variation of the Star Formation History of Dwarf Galaxies

Based on Hubble Space Telescope observations from the Local Cosmology from Isolated Dwarfs project, we present the star formation histories, as a function of galactocentric radius, of four isolated Local Group dwarf galaxies: two dSph galaxies, Cetus and Tucana, and two transition galaxies (dTrs), LGS-3 and Phoenix. The oldest stellar populations of the dSphs and dTrs are, within the uncertainties, coeval (~13 Gyr) at all galactocentric radii. We find that there are no significative differences between the four galaxies in the fundamental properties (such as the normalized star formation rate or age-metallicity relation) of their outer regions (radii greater than four exponential scale lengths); at large radii, these galaxies consist exclusively of old (gsim 10.5 Gyr) metal-poor stars. The duration of star formation in the inner regions varies from galaxy to galaxy, and the extended central star formation in the dTrs produces the dichotomy between dSph and dTr galaxy types. The dTr galaxies show prominent radial stellar population gradients: The centers of these galaxies host young (lsim 1 Gyr) populations, while the age of the last formation event increases smoothly with increasing radius. This contrasts with the two dSph galaxies. Tucana shows a similar, but milder, gradient, but no gradient in age is detected Cetus. For the three galaxies with significant stellar population gradients, the exponential scale length decreases with time. These results are in agreement with outside-in scenarios of dwarf galaxy evolution, in which a quenching of the star formation toward the center occurs as the galaxy runs out of gas in the outskirts. 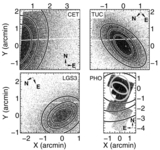