We present an analysis of the star formation history (SFH) of a field near the half-light radius in the Local Group dwarf irregular galaxy IC 1613 based on deep Hubble Space Telescope Advanced Camera for Surveys imaging. Our observations reach the oldest main sequence turn-off, allowing a time resolution at the oldest ages of ~1 Gyr. Our analysis shows that the SFH of the observed field in IC 1613 is consistent with being constant over the entire lifetime of the galaxy. These observations rule out an early dominant episode of star formation in IC 1613. We compare the SFH of IC 1613 with expectations from cosmological models. Since most of the mass is in place at early times for low-mass halos, a naive expectation is that most of the star formation should have taken place at early times. Models in which star formation follows mass accretion result in too many stars formed early and gas mass fractions that are too low today (the "over-cooling problem"). The depth of the present photometry of IC 1613 shows that, at a resolution of ~1 Gyr, the star formation rate is consistent with being constant, at even the earliest times, which is difficult to achieve in models where star formation follows mass assembly. 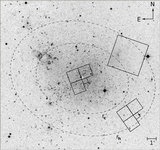