The ACS LCID Project. V. The Star Formation History of the Dwarf Galaxy LGS-3: Clues to Cosmic Reionization and Feedback

We present an analysis of the star formation history (SFH) of the transition-type (dIrr/dSph) Local Group galaxy LGS-3 (Pisces) based on deep photometry obtained with the Advanced Camera for Surveys onboard the Hubble Space Telescope. Our observations reach the oldest main-sequence turnoffs at high signal to noise, allowing a time resolution at the oldest ages of σ ~ 1.1 Gyr. Our analysis, based on three different SFH codes, shows that the SFH of LGS-3 is dominated by a main episode ~11.7 Gyr ago with a duration of ~1.4 Gyr. Subsequently, LGS-3 continued forming stars until the present, although at a much lower rate. Roughly 90% of the stars in LGS-3 were formed in the initial episode of star formation. Extensive tests of self-consistency, uniqueness, and stability of the solution have been performed together with the IAC-star/IAC-pop/MinnIAC codes, and these results are found to be independent of the photometric reduction package, the stellar evolution library, and the SFH recovery method. There is little evidence of chemical enrichment during the initial episode of star formation, after which the metallicity increased more steeply reaching a present-day value of Z ~ 0.0025. This suggests a scenario in which LGS-3 first formed stars mainly from infalling fresh gas, and after about 9 Gyr ago, from a larger fraction of recycled gas. The lack of early chemical enrichment is in contrast to that observed in the isolated dSph galaxies of comparable luminosity, implying that the dSphs were more massive and subjected to more tidal stripping. We compare the SFH of LGS-3 with expectations from cosmological models. Most or all the star formation was produced in LGS-3 after the reionization epoch, assumed to be completed at z ~ 6 or ~12.7 Gyr ago. The total mass of the galaxy is estimated to be between 2 and 4 × 108 M sun corresponding to circular velocities between 28 km s-1 and 36 km s-1. These values are close to but somewhat above the limit of 30 km s-1 below which the UV background is expected to prevent any star formation after reionization. Feedback from supernovae (SNe) associated with the initial episode of star formation (mechanical luminosity from SNe Lw = 5.3 × 1038 erg s-1) is probably inadequate to completely blow away the gas. However, the combined effects of SN feedback and UV background heating might be expected to completely halt star formation at the reionization epoch for the low mass of LGS-3; this suggests that self-shielding is important to the early evolution of galaxies in this mass range. 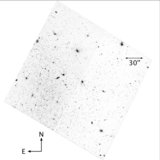