We present proper motions and astrometric membership analysis for 15,750 stars around the intermediate-age open cluster NGC 6819. The accuracy of relative proper motions for well-measured stars ranges from ~0.2 mas yr-1 within 10' of the cluster center to 1.1 mas yr-1 outside this radius. In the proper motion vector-point diagram, the separation between the cluster members and field stars is convincing down to V ~ 18 and within 10' from the cluster center. The formal sum of membership probabilities indicates a total of ~2500 cluster members down to V ~ 22. We confirm the cluster membership of several variable stars, including some eclipsing binaries. The estimated absolute proper motion of NGC 6819 is \mu _x^abs=-2.6+/- 0.5 and \mu _y^abs=-4.2+/- 0.5 mas yr-1. A cross-identification between the proper motion catalog and a list of X-ray sources in the field of NGC 6819 resulted in a number of new likely optical counterparts, including a candidate CV. For the first time we show that there is significant differential reddening toward NGC 6819.

Based on observations collected at the Canada-France-Hawaii Telescope. 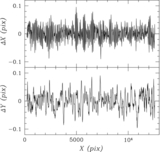