Oxygen has been proposed to be a superior tracer, compared to iron, for studying galactic chemical evolution. In the context of improving our understanding of the evolution of Galactic oxygen using open clusters, we present a spectroscopic analysis of oxygen and iron abundances in the 650 Myr old Hyades cluster and in the 1.45 Gyr old cluster NGC 752, using high-dispersion 7774 Å O I triplet region spectra of dwarfs in these clusters acquired with the Hydra MOS on the WIYN 3.5 m telescope. Motivated by recent improvements in analysis of the triplet, we use a strictly differential analysis in solar-type stars to obtain reliable O abundances. Using stars whose radial velocities and spectral cross-correlation analyses are consistent with single-star membership, we report Hyades cluster averages of [O/H] = 0.195 ± 0.010 and [Fe/H] = 0.130 ± 0.009 based on 22 stars, and NGC 752 cluster averages of [O/H] = -0.077 ± 0.02 and [Fe/H] = -0.063 ± 0.013 based on 36 stars (where the errors are σμ we discuss possible additional systematic errors). These cluster abundance averages are in very good agreement with most previous determinations. Whereas the [O/H] cluster averages utilize only stars found in the "prime" T eff range straddling the solar T eff, the [Fe/H] cluster averages come from stars exhibiting a flat [Fe/H]-T eff relation of over 1000 K for the Hyades and nearly 2000 K for NGC 752. Previous studies of open clusters younger than NGC 752 have reported oxygen triplet over abundances in cool dwarfs, as compared to oxygen abundances of the prime-T eff range. We report that NGC 752 also shows such overabundances, at a higher level than the Hyades overabundances, and thus contradicts the idea of a decline of such overabundances with increasing age. We discuss evidence for and against correlations of the oxygen overabundances with rotation, X-ray luminosity, chromospheric activity, and metallicity. 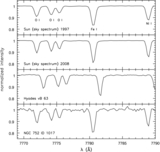