Context. The mass domain where massive extrasolar planets and brown dwarfs lie is still poorly understood. Indeed, not even a clear dividing line between massive planets and brown dwarfs has been established yet. This is partly because these objects are very scarce in close orbits around solar-type stars, the so-called brown dwarf desert. Owing to this, it has proven difficult to set up a strong observational base with which to compare models and theories of formation and evolution.
Aims: We search to increase the current sample of massive sub-stellar objects with precise orbital parameters, and to constrain the true mass of detected sub-stellar candidates.
Methods: The initial identification of sub-stellar candidates was made using precise radial velocity measurements obtained with the SOPHIE spectrograph at the 1.93-m telescope of the Haute-Provence Observatory. Subsequent characterisation of these candidates, with the principal aim of identifying stellar companions in low-inclination orbits, was made by means of different spectroscopic diagnostics such as the measurement of the bisector velocity span and the study of the correlation mask effect. With this objective, we also employed astrometric data from the Hipparcos mission, and a novel method of simulating stellar cross-correlation functions.
Results: Seven new objects with minimum masses between ~10 MJup and ~90 MJup are detected. Out of these, two are identified as low-mass stars in low-inclination orbits, and two others have masses below the theoretical deuterium-burning limit, and are therefore planetary candidates. The remaining three are brown dwarf candidates; the current upper limits for their the masses do not allow us to conclude on their nature. Additionally, we have improved the parameters of an already-known brown dwarf (HD 137510b), confirmed by astrometry.

Based on observations collected with the SOPHIE spectrograph on the 1.93-m telescope at Observatoire de Haute-Provence (CNRS), France, by the SOPHIE Consortium (program 07A.PNP.CONS).Table 2 is only available at the CDS via anonymous ftp to cdsarc.u-strasbg.fr (130.79.128.5) or via http://cdsarc.u-strasbg.fr/viz-bin/qcat?J/A+A/538/A113 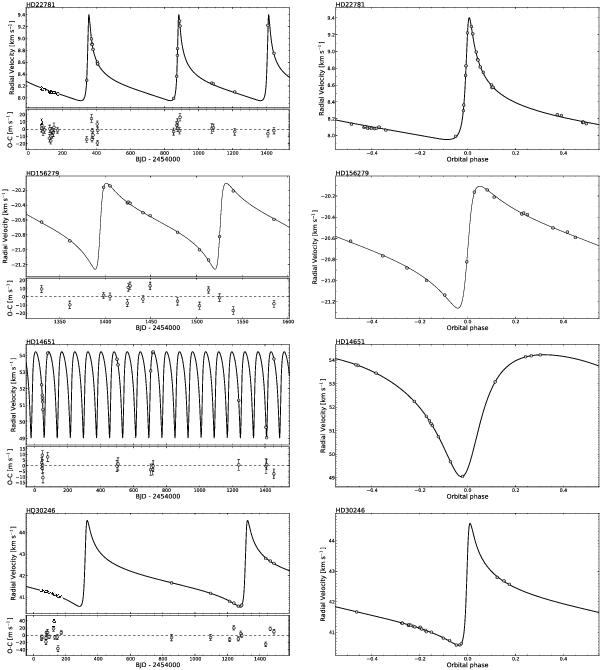