OSSOS. V. Diffusion in the Orbit of a High-perihelion Distant Solar System Object

We report the discovery of the minor planet 2013 SY99 on an exceptionally distant, highly eccentric orbit. With a perihelion of 50.0 au, 2013 SY99’s orbit has a semimajor axis of 730 ± 40 au, the largest known for a high-perihelion trans-Neptunian object (TNO), and well beyond those of (90377) Sedna and 2012 VP113. Yet, with an aphelion of 1420 ± 90 au, 2013 SY99’s orbit is interior to the region influenced by Galactic tides. Such TNOs are not thought to be produced in the current known planetary architecture of the solar system, and they have informed the recent debate on the existence of a distant giant planet. Photometry from the Canada-France-Hawaii Telescope, Gemini North, and Subaru indicate 2013 SY99 is ∼250 km in diameter and moderately red in color, similar to other dynamically excited TNOs. Our dynamical simulations show that Neptune’s weak influence during 2013 SY99’s perihelia encounters drives diffusion in its semimajor axis of hundreds of astronomical units over 4 Gyr. The overall symmetry of random walks in the semimajor axis allows diffusion to populate 2013 SY99’s orbital parameter space from the 1000 to 2000 au inner fringe of the Oort cloud. Diffusion affects other known TNOs on orbits with perihelia of 45 to 49 au and semimajor axes beyond 250 au. This provides a formation mechanism that implies an extended population, gently cycling into and returning from the inner fringe of the Oort cloud. 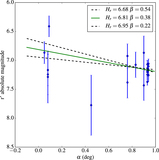