The Outer Solar System Origins Survey (OSSOS), a wide-field imaging program in 2013-2017 with the Canada-France-Hawaii Telescope, surveyed 155 deg2 of sky to depths of m r = 24.1-25.2. We present 838 outer solar system discoveries that are entirely free of ephemeris bias. This increases the inventory of trans-Neptunian objects (TNOs) with accurately known orbits by nearly 50%. Each minor planet has 20-60 Gaia/Pan-STARRS-calibrated astrometric measurements made over 2-5 oppositions, which allows accurate classification of their orbits within the trans-Neptunian dynamical populations. The populations orbiting in mean-motion resonance with Neptune are key to understanding Neptune’s early migration. Our 313 resonant TNOs, including 132 plutinos, triple the available characterized sample and include new occupancy of distant resonances out to semimajor axis a ∼ 130 au. OSSOS doubles the known population of the nonresonant Kuiper Belt, providing 436 TNOs in this region, all with exceptionally high-quality orbits of a uncertainty σ a ≤ 0.1% they show that the belt exists from a ≳ 37 au, with a lower perihelion bound of 35 au. We confirm the presence of a concentrated low-inclination a ≃ 44 au “kernel” population and a dynamically cold population extending beyond the 2:1 resonance. We finely quantify the survey’s observational biases. Our survey simulator provides a straightforward way to impose these biases on models of the trans-Neptunian orbit distributions, allowing statistical comparison to the discoveries. The OSSOS TNOs, unprecedented in their orbital precision for the size of the sample, are ideal for testing concepts of the history of giant planet migration in the solar system. 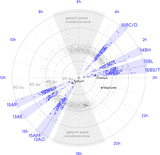