We present absorption line indices measured in the integrated spectra of globular clusters both from the Galaxy and from M31. Our samples include 41 Galactic globular clusters, and more than 300 clusters in M31. The conversion of instrumental equivalent widths into the Lick system is described, and zero-point uncertainties are provided. Comparison of line indices of old M31 clusters and Galactic globular clusters suggests an absence of important differences in chemical composition between the two cluster systems. In particular, CN indices in the spectra of M31 and Galactic clusters are essentially consistent with each other, in disagreement with several previous works. We reanalyze some of the previous data, and conclude that reported CN differences between M31 and Galactic clusters were mostly due to data calibration uncertainties. Our data support the conclusion that the chemical compositions of Milky Way and M31 globular clusters are not substantially different, and that there is no need to resort to enhanced nitrogen abundances to account for the optical spectra of M31 globular clusters. 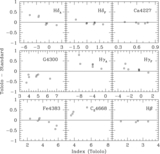