We present internal velocity dispersions and precise radial velocities for 200 globular clusters (GCs) in M31 that are derived using new high-resolution spectra from MMT/Hectochelle. Of these, 163 also have King model structural parameters that allow us to estimate their mass-to-light ratios. This is, by far, the largest such data set available for any galaxy, including the Milky Way. These data strongly confirm earlier suggestions that the optical and near-infrared mass-to-light ratios of M31 GCs decline with increasing metallicity. This behavior is the opposite of that predicted by stellar population models for a standard initial mass function. We show that this phenomenon does not appear to be caused by standard dynamical evolution. A shallower mass function for metal-rich GCs (with dN/dMvpropM -0.8-M -1.3 below 1 M sun) can explain the bulk of extant observations. We also observe a consistent, monotonic correlation between mass-to-light ratio and cluster mass. This correlation, in contrast to the correlation with metallicity, is well explained by the accepted model of dynamical evolution of GCs through mass segregation and the preferential loss of low-mass stars, and these data are among the best available to constrain this process. 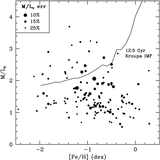