Physical conditions in the gas phases of the giant H II region LMC-N 11 unveiled by Herschel . I. Diffuse [C II] and [O III] emission in LMC-N 11B

Context. The Magellanic Clouds provide a nearby laboratory for metal-poor dwarf galaxies. The low dust abundance enhances the penetration of UV photons into the interstellar medium (ISM), resulting in a relatively larger filling factor of the ionized gas. Furthermore, there is very likely a molecular gas reservoir probed by the [C ii] 157 μm line not traced by CO(1-0), the so-called "dark" gas. The Herschel Space Telescope allows us to observe far-infrared (FIR) cooling lines and to examine the physical conditions in the gas phases of a low-metallicity environment to unprecedented, small spatial scales.
Aims: Our objective is to interpret the origin of the diffuse emission of FIR cooling lines in the H ii region N 11B in the Large Magellanic Cloud. We first investigate the filling factor of the ionized gas. We then constrain the origin of the [C ii] line by comparing to tracers of the low-excitation ionized gas and of photodissociation regions (PDRs).
Methods: We present Herschel/PACS maps of N 11B in several tracers, [C ii] 157 μm, [O i] 63 μm and 145 μm, [N ii] 122 μm, [N iii] 57 μm, and [O iii] 88 μm. Optical images in Hα and [O iii] 5007 Å were used as complementary data to investigate the effect of dust extinction. Observations were interpreted with photoionization models to infer the gas conditions and estimate the ionized gas contribution to the [C ii] emission. PDRs were probed through polycyclic aromatic hydrocarbons (PAHs) observed with the Spitzer Space Telescope.
Results: [O iii] 88 μm is dominated by extended emission from the high-excitation diffuse ionized gas. This is the brightest FIR line throughout N 11B, ~4 times brighter than [C ii]. We find that about half of the emission from the ionized gas is extinguished by dust. We modeled [O iii] around each O-type star and find that the density of the ISM is ≲16 cm-3 on large scales. The extent of the [O iii] emission suggests that the medium is rather fragmented, allowing far-UV photons to permeates the ISM to scales of ≳30 pc. Furthermore, by comparing [C ii] with [N ii] 122 μm, we find that 95% of [C ii] arises in PDRs, except toward the stellar cluster for which as much as 15% could arise in the ionized gas. We find a remarkable correlation between [C ii]+[O i] and PAH emission, with [C ii] dominating the cooling in diffuse PDRs and [O i] dominating in the densest PDRs. The combination of [C ii] and [O i] provides a proxy for the total gas cooling. Our results suggest that PAH emission describes better the gas heating in PDRs as compared to the total infrared emission.

Herschel is an ESA space observatory with science instruments provided by European-led Principal Investigator consortia and with important participation from NASA.Appendix A is available in electronic form at http://www.aanda.org 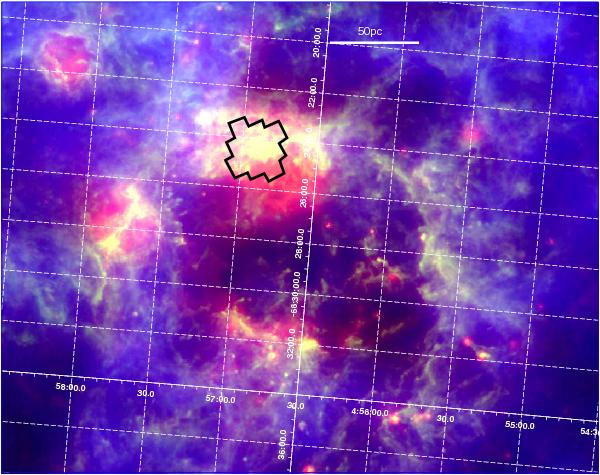