Aims: We study the content in S-bearing molecules of protoplanetary disks around low-mass stars.
Methods: We used the new IRAM 30-m receiver EMIR to perform simultaneous observations of the 110-101 line of H2S at 168.8 GHz and 223-112 line of SO at 99.3 GHz. We compared the observational results with predictions coming from the astrochemical code NAUTILUS, which has been adapted to protoplanetary disks. The data were analyzed together with existing CS J = 3-2 observations.
Results: We fail to detect the SO and H2S lines, although CS is detected in LkCa15, DM Tau, and GO Tau but not in MWC 480. However, our new upper limits are significantly better than previous ones and allow us to put some interesting constraints on the sulfur chemistry.
Conclusions: Our best modeling of disks is obtained for a C/O ratio of 1.2, starting from initial cloud conditions of H density of 2 × 105 cm-3 and age of 106 yr. The results agree with the CS data and are compatible with the SO upper limits, but fail to reproduce the H2S upper limits. The predicted H2S column densities are too high by at least one order of magnitude. H2S may remain locked onto grain surfaces and react with other species, thereby preventing the desorption of H2S.

Based on observations carried out with the IRAM 30m radiotelescope. IRAM is supported by INSU/CNRS (France), MPG (Germany), and IGN (Spain). 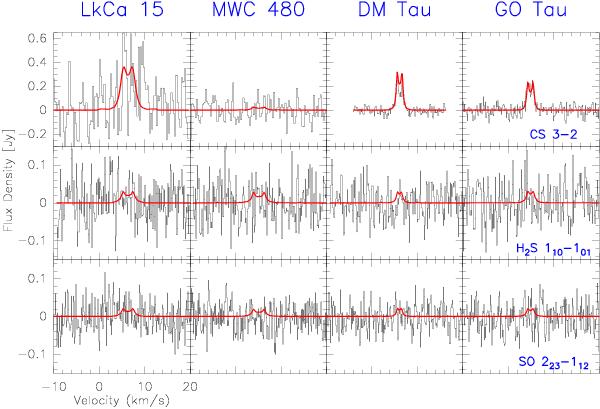