We studied several representative circumstellar disks surrounding the Herbig Ae star MWC 480 and the T Tauri stars LkCa 15 and DM Tau at (sub-)millimeter wavelengths in lines of CCH. Our aim is to characterize photochemistry in the heavily UV-irradiated MWC 480 disk and compare the results to the disks around cooler T Tauri stars. We detected and mapped CCH in these disks with the IRAM Plateau de Bure Interferometer in the C and D configurations in the (1-0) and (2-1) transitions. Using an iterative minimization technique, the CCH column densities and excitation conditions are constrained. Very low excitation temperatures are derived for the T Tauri stars. These values are compared with the results of advanced chemical modeling, which is based on a steady-state flared disk structure with a vertical temperature gradient, and a gas-grain chemical network with surface reactions. Both model and observations suggest that CCH is a sensitive tracer of the X-ray and UV irradiation. The predicted radial dependency and source-to-source variations of CCH column densities qualitatively agree with the observed values, but the predicted column densities are too low by a factor of several. The chemical model fails to reproduce high concentrations of CCH in very cold disk midplane as derived from the observed low excitation condition for both the (1-0) and (2-1) transitions. 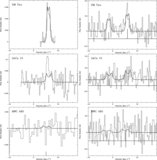