The detected exoplanet population displays a dearth of planets with sizes of about two Earth radii, the so-called radius gap. This is interpreted as an evolutionary effect driven by a variety of possible atmospheric mass-loss processes of exoplanets. For mass loss driven by an exoplanet's irradiation by stellar X-ray and extreme-UV photons, the time evolution of the stellar magnetic activity is important. It is known from observations of open stellar clusters that stars of the same age and mass do not all follow the same time evolution of activity-induced X-ray and extreme-UV luminosities. Here, we explore how a realistic spread of different stellar activity tracks influences the mass loss and radius evolution of a simulated population of small exoplanets and the observable properties of the radius gap. Our results show qualitatively that different saturation time-scales, i.e. the young age at which stellar high-energy emission starts to decline, and different activity decay tracks over moderate stellar ages can cause changes in the population density of planets in the gap, as well as in the observable width of the gap. We also find that while the first 100 million years of mass loss are highly important to shape the radius gap, significant evolution of the gap properties is expected to take place for at least the first 500-600 million years, i.e. the age of the Hyades cluster. Observations of exoplanet populations with defined ages will be able to shed more light on the radius gap evolution. 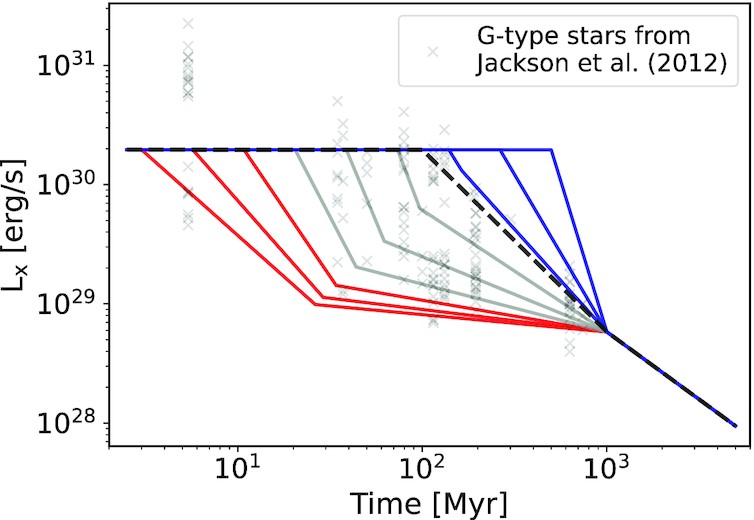