Environment has long been known to have significant impact on the evolution of galaxies, but here we seek to quantify the subtler differences that might be found in disc galaxies, depending on whether they are isolated, the most massive galaxy in a group (centrals), or a lesser member (satellites). The MaNGA survey allows us to define a large mass-matched sample of 574 galaxies with high-quality integrated spectra in each category. Initial examination of their spectral indices indicates significant differences, particularly in low-mass galaxies. Semi-analytic spectral fitting of a full chemical evolution model to these spectra confirms these differences, with low-mass satellites having a shorter period of star formation and chemical enrichment typical of a closed box, while central galaxies have more extended histories, with evidence of ongoing gas accretion over their lifetimes. The derived parameters for gas infall time-scale and wind strength suggest that low-mass satellite galaxies have their hot haloes of gas effectively removed, while central galaxies retain a larger fraction of gas than isolated galaxies due to the deeper group potential well in which they sit. S0 galaxies form a distinct subset within the sample, particularly at higher masses, but do not bias the inferred lower mass environmental impact significantly. The consistent picture that emerges underlines the wealth of archaeological information that can be extracted from high-quality spectral data using techniques like semi-analytic spectral fitting. 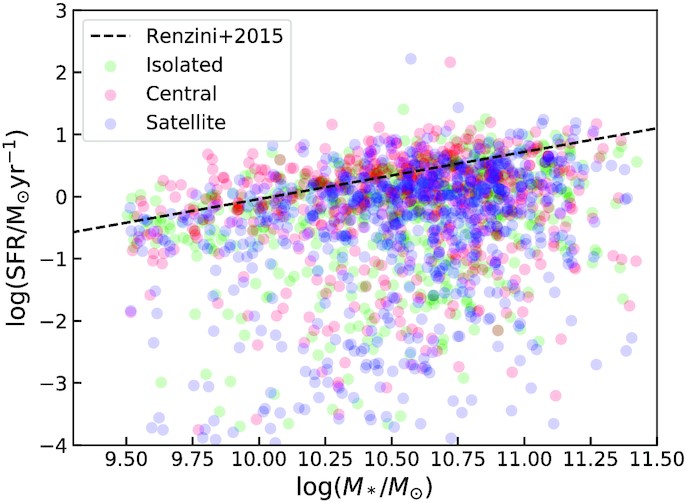