MIGHTEE: the nature of the radio-loud AGN population

We study the nature of the faint radio source population detected in the MeerKAT International GHz Tiered Extragalactic Exploration (MIGHTEE) Early Science data in the COSMOS field, focusing on the properties of the radio-loud active galactic nuclei (AGNs). Using the extensive multiwavelength data available in the field, we are able to classify 88 per cent of the 5223 radio sources in the field with host galaxy identifications as AGNs (35 per cent) or star-forming galaxies (54 per cent). We select a sample of radio-loud AGNs with redshifts out to z ~ 6 and radio luminosities 1020 < L1.4 GHz/W Hz-1 < 1027 and classify them as high-excitation and low-excitation radio galaxies (HERGs and LERGs). The classification catalogue is released with this work. We find no significant difference in the host galaxy properties of the HERGs and LERGs in our sample. In contrast to previous work, we find that the HERGs and LERGs have very similar Eddington-scaled accretion rates; in particular we identify a population of very slowly accreting AGNs that are formally classified as HERGs at these low radio luminosities, where separating into HERGs and LERGs possibly becomes redundant. We investigate how black hole mass affects jet power, and find that a black hole mass ≳ 107.8 M⊙ is required to power a jet with mechanical power greater than the radiative luminosity of the AGN (Lmech/Lbol > 1). We discuss that both a high black hole mass and black hole spin may be necessary to launch and sustain a dominant radio jet. 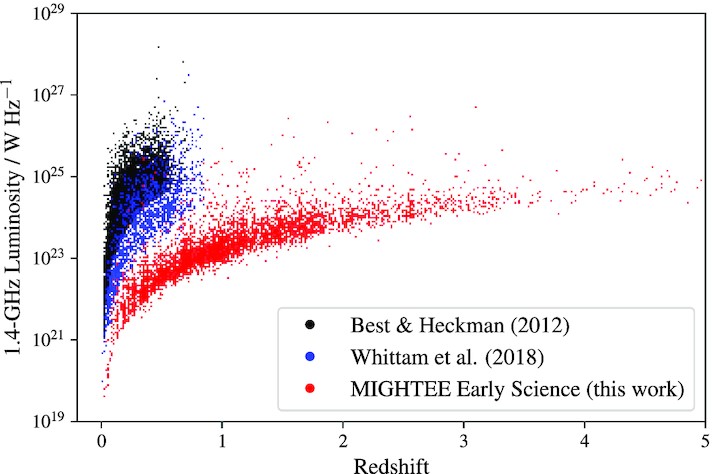