Outflows and spectral evolution in the eclipsing AMXP SWIFT J1749.4-2807 with NICER, XMM-Newton, and NuSTAR

The neutron star low-mass X-ray binary SWIFT J1749.4-2807 is the only known eclipsing accreting millisecond X-ray pulsar. In this manuscript, we perform a spectral characterization of the system throughout its 2021, 2-week-long outburst, analysing 11 NICER observations and quasi-simultaneous XMM-Newton and NuSTAR single observations at the outburst peak. The broad-band spectrum is well-modelled with a blackbody component with a temperature of ~0.6 keV, most likely consistent with a hotspot on the neutron star surface, and a Comptonization spectrum with power-law index Γ ~ 1.9, arising from a hot corona at ~12 keV. No direct emission from the disc was found, possibly due to it being too cool. A high truncation radius for the disc, i.e. at ~20-30 RG, was obtained from the analysis of the broadened profile of the Fe line in the reflection component. The significant detection of a blue-shifted Fe XXVI absorption line at ~7 keV indicates weakly relativistic X-ray disc winds, which are typically absent in the hard state of X-ray binaries. By comparing the low flux observed during the outburst and the one expected in a conservative mass-transfer, we conclude that mass-transfer in the system is highly non-conservative, as also suggested by the wind detection. Finally, using the NICER spectra alone, we followed the system while it was fading to quiescence. During the outburst decay, as the spectral shape hardened, the hotspot on the neutron star surface cooled down and shrank, a trend which could be consistent with the pure power-law spectrum observed during quiescence. 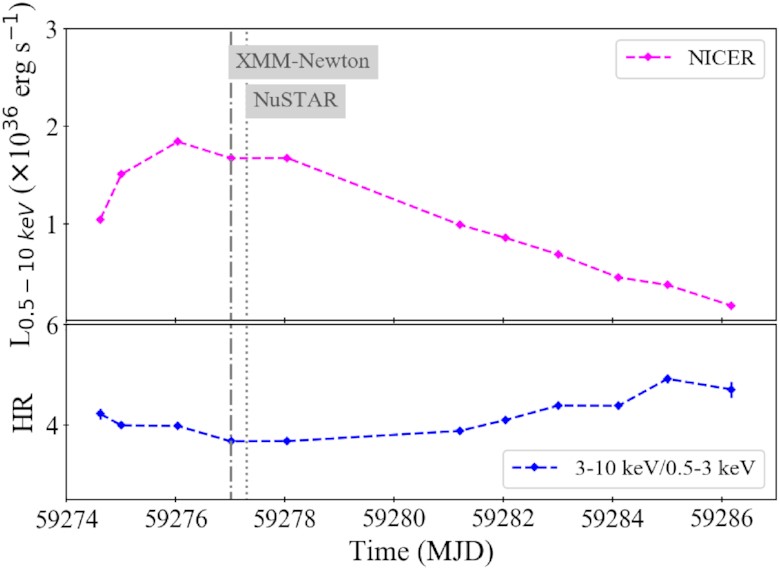