When considering gaps in debris discs, a typical approach is to invoke clearing by an unseen planet within the gap, and derive the planet mass using Wisdom overlap or Hill radius arguments. However, this approach can be invalid if the disc is massive, because clearing would also cause planet migration. This could result in a calculated planet mass that is incompatible with the inferred disc mass, because the predicted planet would in reality be too small to carve the gap without significant migration. We investigate the gap that a single embedded planet would carve in a massive debris disc. We show that a degeneracy is introduced, whereby an observed gap could be carved by two different planets: either a high-mass, barely migrating planet, or a smaller planet that clears debris as it migrates. We find that, depending on disc mass, there is a minimum possible gap width that an embedded planet could carve (because smaller planets, rather than carving a smaller gap, would actually migrate through the disc and clear a wider region). We provide simple formulae for the planet-to-debris disc mass ratio at which planet migration becomes important, the gap width that an embedded planet would carve in a massive debris disc, and the interaction time-scale. We also apply our results to various systems, and in particular show that the disc of HD 107146 can be reasonably well-reproduced with a migrating, embedded planet. Finally, we discuss the importance of planet-debris disc interactions as a tool for constraining debris disc masses. 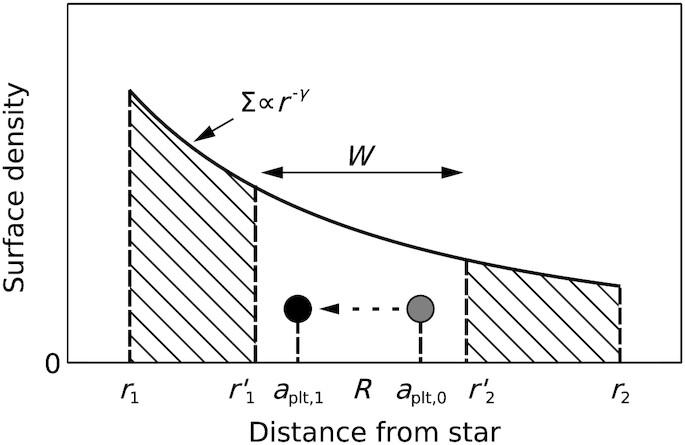