Connecting galaxy evolution in clusters with their radial profiles and phase space distribution: results from the IllustrisTNG hydrodynamical simulations

We study the population of galaxies around galaxy clusters in the hydrodynamic simulation suite IllustrisTNG 300-1 to study the signatures of their evolutionary history on observable properties. We measure the radial number density profile, phase space distribution, and splashback radius for galaxies of different masses and colours over the redshift range z = 0-1. The three primary physical effects which shape the galaxy distribution within clusters are the galaxy quenching, angular momentum distribution, and dynamical friction. We find three distinct populations of galaxies by applying a Gaussian mixture model to their distribution in colour and mass. They have distinct evolutionary histories and leave distinct signatures on their distribution around cluster haloes. We find that low-mass red galaxies show the most concentrated distribution in clusters and the largest splashback radius, while high-mass red galaxies show a less concentrated distribution and a smaller splashback radius. Blue galaxies, which mostly quench into the low-mass red population, have the shallowest distribution within the clusters, with those on radial orbits quenched rapidly before reaching pericentre. Comparison with the distribution of galaxies from the Dark Energy Survey survey around Sunyaev-Zeldovich clusters from the Atacama Cosmology Telescope and South Pole Telescope surveys shows evidence for differences in galaxy evolution between simulations and data. 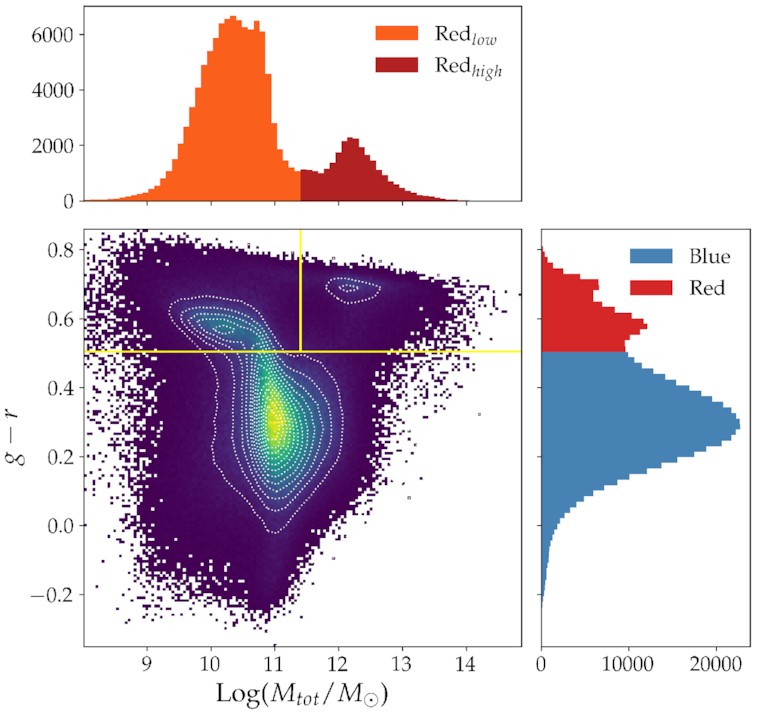