In large-scale hydrodynamical cosmological simulations, the fate of massive galaxies is mainly dictated by the modelling of feedback from active galactic nuclei (AGNs). The amount of energy released by AGN feedback is proportional to the mass that has been accreted on to the black holes (BHs), but the exact subgrid modelling of AGN feedback differs in all simulations. While modern simulations reliably produce populations of quiescent massive galaxies at z ≤ 2, it is also crucial to assess the similarities and differences of the responsible AGN populations. Here, we compare the AGN populations of the Illustris, TNG100, TNG300, Horizon-AGN, EAGLE, and SIMBA simulations. The AGN luminosity function (LF) varies significantly between simulations. Although in agreement with current observational constraints at z = 0, at higher redshift the agreement of the LFs deteriorates with most simulations producing too many AGNs of $L_{\rm x, 2\!-\!10 \, keV}\sim 10^{43\!-\!44}\, \rm erg\, s^{-1}$. AGN feedback in some simulations prevents the existence of any bright AGN with $L_{\rm x, 2\!-\!10 \, keV}\geqslant 10^{45}\rm \,erg\, s^{-1}$ (although this is sensitive to AGN variability), and leads to smaller fractions of AGN in massive galaxies than in the observations at z ≤ 2. We find that all the simulations fail at producing a number density of AGN in good agreement with observational constraints for both luminous ($L_{\rm x, 2\!-\!10 \, keV}\sim 10^\text{43-45}\, \rm erg\, s^{-1}$) and fainter ($L_{\rm x, 2\!-\!10 \, keV}\sim 10^\text{42-43}\, \rm erg\, s^{-1}$) AGNs and at both low and high redshifts. These differences can aid us in improving future BH and galaxy subgrid modelling in simulations. Upcoming X-ray missions (e.g. Athena, AXIS, and LynX) will bring faint AGNs to light and new powerful constraints. After accounting for AGN obscuration, we find that the predicted number density of detectable AGNs in future surveys spans at least one order of magnitude across the simulations, at any redshift. 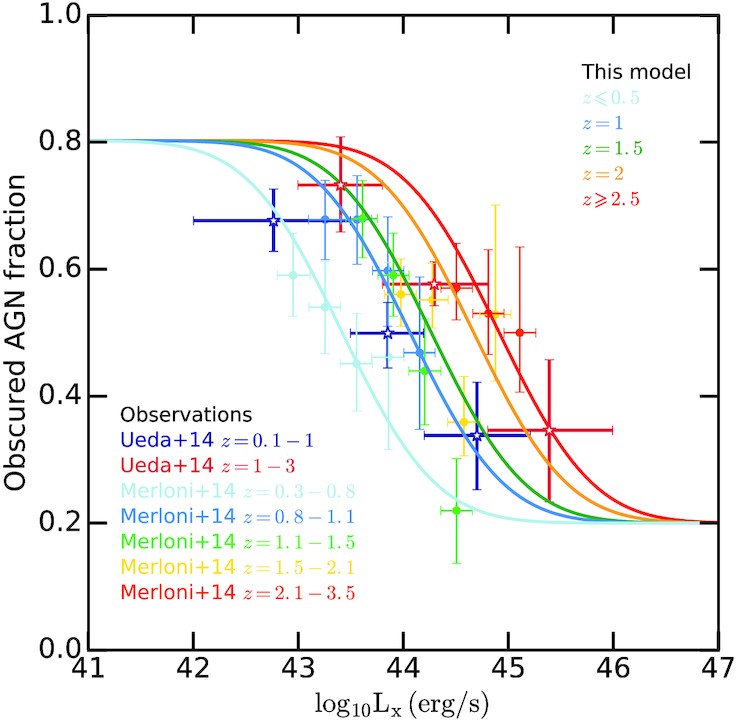