We provide a database of transit times and updated ephemerides for 382 planets based on data from the NASA Transiting Exoplanet Survey Satellite (TESS) and previously reported transit times, which were scraped from the literature in a semiautomated fashion. In total, our database contains 8667 transit-timing measurements for 382 systems. About 240 planets in the catalog are hot Jupiters (i.e., planets with mass >0.3 M Jup and period <10 days) that have been observed by TESS. The new ephemerides are useful for scheduling follow-up observations and searching for long-term period changes. WASP-12 remains the only system for which a period change is securely detected. We remark on other cases of interest, such as a few systems with suggestive (but not yet convincing) evidence for period changes, and the detection of a second transiting planet in the NGTS-11 system. The compilation of light curves, transit times, ephemerides, and timing residuals are made available online, along with the Python code that generated them (visit https://transit-timing.github.io). 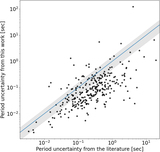