The ALMaQUEST Survey. VIII. What Causes the Discrepancy in the Velocity between the CO and Hα Rotation Curves in Galaxies?

We compare the CO(1-0) and Hα kinematics in 34 nearby galaxies, selected from the ALMaQUEST and EDGE-CALIFA surveys. We use 3D-Barolo, a 3D tilted-ring model, to derive the CO and Hα rotation curves. Before comparing rotation curves in the 34 nearby galaxies, we found systematics between the MaNGA and CALIFA data using eight MaNGA-CALIFA overlapping galaxies. We assume the rotation curves based on the MaNGA data are accurate and made the corresponding correction to the CALIFA data. Our result shows that ~56% (19/34) of our galaxies present slower Hα rotation curves compared to the CO rotation curves, with a median value of 6.5 km s-1. The remaining galaxies (15/34) show consistent CO-Hα rotation velocity within uncertainties. As a result, the Hα rotation may underestimate the total dynamical mass by 6% for a circular velocity of 200 km s-1 (the median value in our sample). Furthermore, the difference in the velocity between the CO and Hα rotational velocity is found to correlate with the difference in velocity dispersion between CO and Hα, suggesting that gas pressure plays a role in the discrepancy in velocity. After incorporating the effect of pressure support due to the turbulent gas motion into our sample, the median value of the difference in the velocities decreases to 1.9 km s-1, which in turn reduces the underestimation of the dynamical mass to ~2%. Finally, we also investigate the role that the extraplanar diffuse ionized gas plays in the discrepancy in the velocity of CO-Hα. 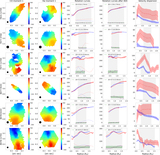