Exploring the S-process History in the Galactic Disk: Cerium Abundances and Gradients in Open Clusters from the OCCAM/APOGEE Sample

The APOGEE Open Cluster Chemical Abundances and Mapping survey is used to probe the chemical evolution of the s-process element cerium in the Galactic disk. Cerium abundances were derived from measurements of Ce II lines in the APOGEE spectra using the Brussels Automatic Code for Characterizing High Accuracy Spectra in 218 stars belonging to 42 open clusters. Our results indicate that, in general, for ages < 4 Gyr, younger open clusters have higher [Ce/Fe] and [Ce/α-element] ratios than older clusters. In addition, metallicity segregates open clusters in the [Ce/X]-age plane (where X can be H, Fe, or the α-elements O, Mg, Si, or Ca). These metallicity-dependent relations result in [Ce/Fe] and [Ce/α] ratios with ages that are not universal clocks. Radial gradients of [Ce/H] and [Ce/Fe] ratios in open clusters, binned by age, were derived for the first time, with d[Ce/H]/d R GC being negative, while d[Ce/Fe]/d R GC is positive. [Ce/H] and [Ce/Fe] gradients are approximately constant over time, with the [Ce/Fe] gradient becoming slightly steeper, changing by ~+0.009 dex kpc-1 Gyr-1. Both the [Ce/H] and [Ce/Fe] gradients are shifted to lower values of [Ce/H] and [Ce/Fe] for older open clusters. The chemical pattern of Ce in open clusters across the Galactic disk is discussed within the context of s-process yields from asymptotic giant branch (AGB) stars, gigayear time delays in Ce enrichment of the interstellar medium, and the strong dependence of Ce nucleosynthesis on the metallicity of its AGB stellar sources. 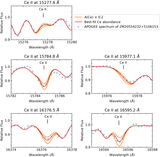