The Triangulum Extended (TREX) Survey: The Stellar Disk Dynamics of M33 as a Function of Stellar Age

Triangulum (M33) is a low-mass, relatively undisturbed spiral galaxy that offers a new regime in which to test models of dynamical heating. In spite of its proximity, M33's dynamical heating history has not yet been well-constrained. In this work, we present the TREX Survey, the largest stellar spectroscopic survey across the disk of M33. We present the stellar disk kinematics as a function of age to study the past and ongoing dynamical heating of M33. We measure line-of-sight velocities for ~4500 disk stars. Using a subset, we divide the stars into broad age bins using Hubble Space Telescope and Canada-France-Hawaii Telescope photometric catalogs: massive main-sequence stars and helium-burning stars (~80 Myr), intermediate-mass asymptotic branch stars (~1 Gyr), and low-mass red giant branch stars (~4 Gyr). We compare the stellar disk dynamics to that of the gas using existing H I, CO, and Hα kinematics. We find that the disk of M33 has relatively low-velocity dispersion (~16 km s-1), and unlike in the Milky Way and Andromeda galaxies, there is no strong trend in velocity dispersion as a function of stellar age. The youngest disk stars are as dynamically hot as the oldest disk stars and are dynamically hotter than predicted by most M33-like low-mass simulated analogs in Illustris. The velocity dispersion of the young stars is highly structured, with the large velocity dispersion fairly localized. The cause of this high-velocity dispersion is not evident from the observations and simulated analogs presented here. 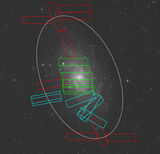