Trapping (sub-)Neptunes similar to TOI-216b at the inner disk rim. Implications for the disk viscosity and the Neptunian desert

Context. The occurrence rate of observed sub-Neptunes has a break at 0.1 au, which is often attributed to a migration trap at the inner rim of protoplanetary disks where a positive co-rotation torque prevents inward migration.
Aims: We argue that conditions in inner disk regions are such that sub-Neptunes are likely to open gaps, lose the support of the co-rotation torque as their co-rotation regions become depleted, and the trapping efficiency then becomes uncertain. We study what it takes to trap such gap-opening planets at the inner disk rim.
Methods: We performed 2D locally isothermal and non-isothermal hydrodynamic simulations of planet migration. A viscosity transition was introduced in the disk to (i) create a density drop and (ii) mimic the viscosity increase as the planet migrated from a dead zone towards a region with active magneto-rotational instability (MRI). We chose TOI-216b as a Neptune-like upper-limit test case, but we also explored different planetary masses, both on fixed and evolving orbits.
Results: For planet-to-star mass ratios q ≃ (4-8) × 10−5, the density drop at the disk rim becomes reshaped due to a gap opening and is often replaced with a small density bump centred on the planet's co-rotation. Trapping is possible only if the bump retains enough gas mass and if the co-rotation region becomes azimuthally asymmetric, with an island of librating streamlines that accumulate a gas overdensity ahead of the planet. The overdensity exerts a positive torque that can counteract the negative torque of spiral arms. Under suitable conditions, the overdensity turns into a Rossby vortex. In our model, efficient trapping depends on the a viscosity and its contrast across the viscosity transition. In order to trap TOI-216b, αDZ = 10−3 in the dead zone requires αMRI ≳ 5 × 10−2 in the MRI-active zone. If αDZ = 5 × 10−4, αMRI ≳ 7.5 × 10−2 is needed.
Conclusions: We describe a new regime of a migration trap relevant for massive (sub-)Neptunes that puts valuable constraints on the levels of turbulent stress in the inner part of their natal disks. 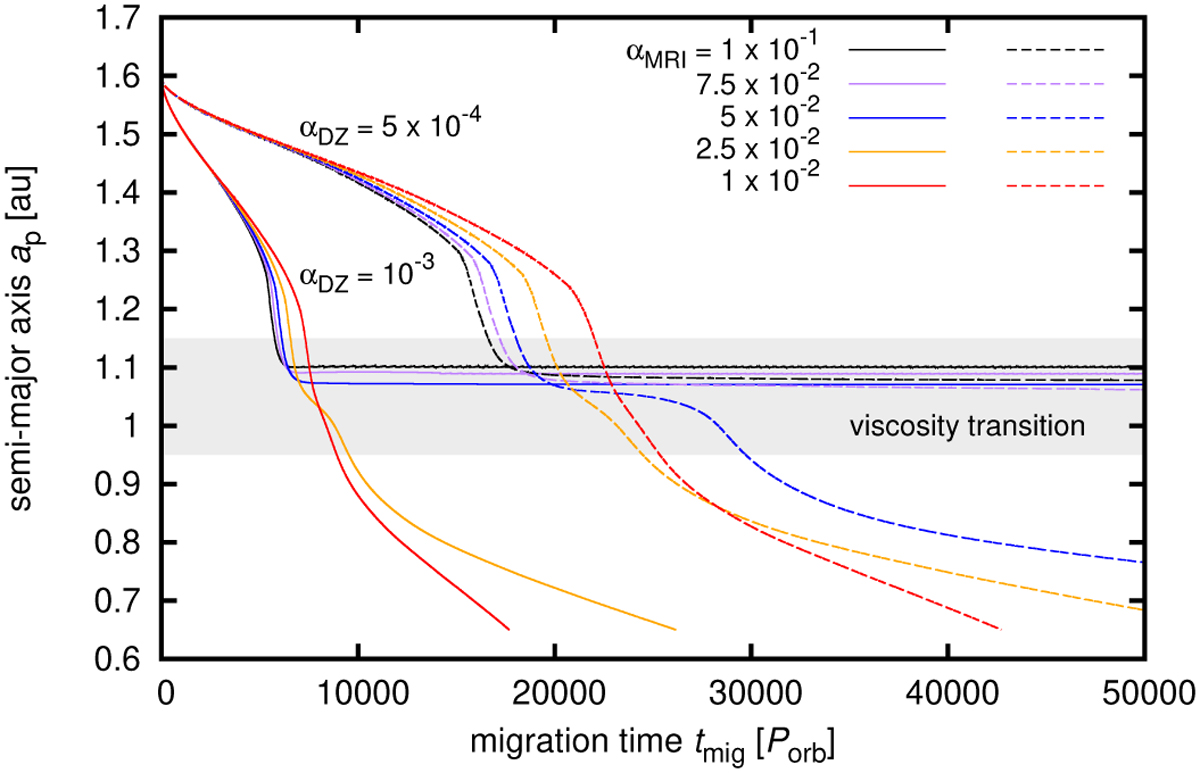