Context. The Magellanic Clouds host a large population of high-mass X-ray binary (HMXB) systems, and although the Large Magellanic Cloud (LMC) is an order of magnitude more massive than the Small Magellanic Cloud, there are significantly fewer known HMXBs in the former.
Aims: We conducted a search for new HMXBs in XMM-Newton observations that were performed with the aim of investigating supernova remnant candidates in the supergiant shells LMC5 and LMC7. The three observed fields are located in regions that have not been widely explored in the X-ray band.
Methods: We analysed the XMM-Newton data to look for sources with hard X-ray spectrum and their counterparts with optical colours and brightness values that are typical of HMXBs.
Results: We report the discovery of three new Be/X-ray binaries, two of them showing pulsations in their X-ray flux. With a luminosity of 6.5 × 1034 erg s−1, we see that XMMU J045315.1−693242 in LMC7 was relatively X-ray faint. The long-term OGLE I-band light curve of the V = 15.5 mag counterpart suggests a 49.6 day or 24.8 day orbital period for the binary system. Then, XMMU J045736.9−692727, which is also located in LMC7, was brighter, with a luminosity of 5.6 × 1035 erg s−1 and hard spectrum with a power-law photon index of 0.63. The X-ray flux revealed clear pulsations with a period of 317.7 s. We obtained optical high resolution spectra from the V = 14.2 mag counterpart using the SALT-HRS spectrograph. Hα and Hβ were observed in emission with complex line profiles and equivalent widths of −8.0 Å and −1.3 Å, respectively. The I-band light curve obtained from OGLE shows a series of four strong outbursts followed by a sudden drop in brightness by more than 1 mag within 73-165 days and a recovery to the level from before the outbursts. RX J0524.2−6620, previously classified as X-ray binary candidate, is located at the eastern part of LMC5. We report the discovery of 360.7 s pulsations. During the XMM-Newton observation the luminosity was at ∼4 × 1035 erg s−1 and the source showed a hard spectrum with a power-law photon index of 0.78. The Hα emission line profile obtained from SALT-HRS is characterised by two broad peaks with a separation corresponding to ∼178 km s−1, along with an equivalent width of −4.2 Å. The long-term OGLE I-band light curve of the V = 14.9 mag counterpart reveals a quasi-periodic flaring activity while the colour evolution during the flares follows a hysteresis loop with redder colour during the rise. Based on the modelling the Hα line profiles measured from XMMU J045736.9−692727 and RX J0524.2−6620, we derived constraints on the size of the Be disks.
Conclusions: Our discovery of two pulsars among three new Be/X-ray binaries increases the number of known HMXB pulsars in the LMC to 25. 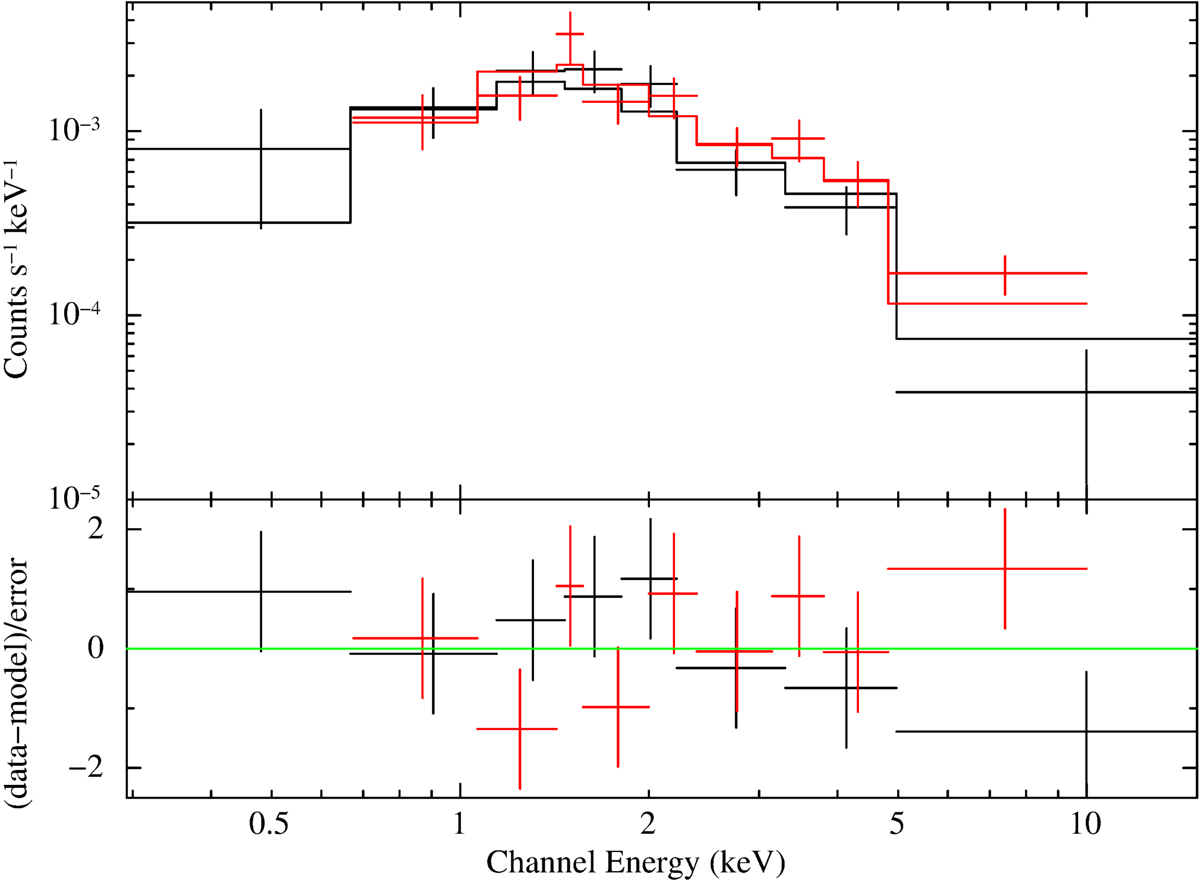