Context. Luminous blue variables (LBVs) are characterised by strong photometric and spectroscopic variability. They are thought to be in a transitory phase between O-type stars on the main sequence and the Wolf-Rayet stage. Recent studies also evoked the possibility that they might be formed through binary interaction. Only a few are known in binary systems so far, but their multiplicity fraction is still uncertain.
Aims: We derive the binary fraction of the Galactic LBV population. We combine multi-epoch spectroscopy and long-baseline interferometry to probe separations from 0.1 to 120 mas around confirmed and candidate LBVs.
Methods: We used a cross-correlation technique to measure the radial velocities of these objects. We identified spectroscopic binaries through significant radial velocity variability with an amplitude larger than 35 km s−1. We also investigated the observational biases to take them into account when we established the intrinsic binary fraction. We used CANDID to detect interferometric companions, derive their flux fractions, and their positions on the sky.
Results: From the multi-epoch spectroscopy, we derive an observed spectroscopic binary fraction of 26−10+16%. Considering period and mass ratio ranges from log(Porb) = 0 − 3 (i.e. from 1 to 1000 days), q = 0.1 − 1.0, and a representative set of orbital parameter distributions, we find a bias-corrected binary fraction of 62−24+38%. Based on data of the interferometric campaign, we detect a binary fraction of 70 ± 9% at projected separations between 1 and 120 mas. Based on the derived primary diameters and considering the distances of these objects, we measure for the first time the exact radii of Galactic LBVs to be between 100 and 650 R⊙. This means that it is unlikely that short-period systems are included among LBV-like stars.
Conclusions: This analysis shows for the first time that the binary fraction in the Galactic LBV population is large. If they form through single-star evolution, their orbit must be large initially. If they form through a binary channel, the implication is that either massive stars in short binary systems must undergo a phase of fully non-conservative mass transfer to be able to sufficiently widen the orbit to form an LBV, or that LBVs form through merging in initially binary or triple systems. Interferometric follow-up would provide the distributions of orbital parameters at more advanced stages and would serve to quantitatively test the binary evolution in massive stars.

Full Table A.1 is only available at the CDS via anonymous ftp to cdsarc.u-strasbg.fr (ftp://130.79.128.5) or via http://cdsarc.u-strasbg.fr/viz-bin/cat/J/A+A/657/A4 Based on observations collected at the ESO Paranal observatory under ESO program 0102.D-0460(A), on spectra obtained with the Mercator Telescope, operated on the island of La Palma by the Flemish Community, at the Spanish Observatorio del Roque de los Muchachos of the Instituto de Astrofísica de Canarias, on observations made with the Southern African Large Telescope (SALT) under programme 2019-1-SCI-001, and with the TIGRE telescope, located at La Luz observatory, Mexico (TIGRE is a collaboration of the Hamburger Sternwarte, the Universities of Hamburg, Guanajuato, and Liège). 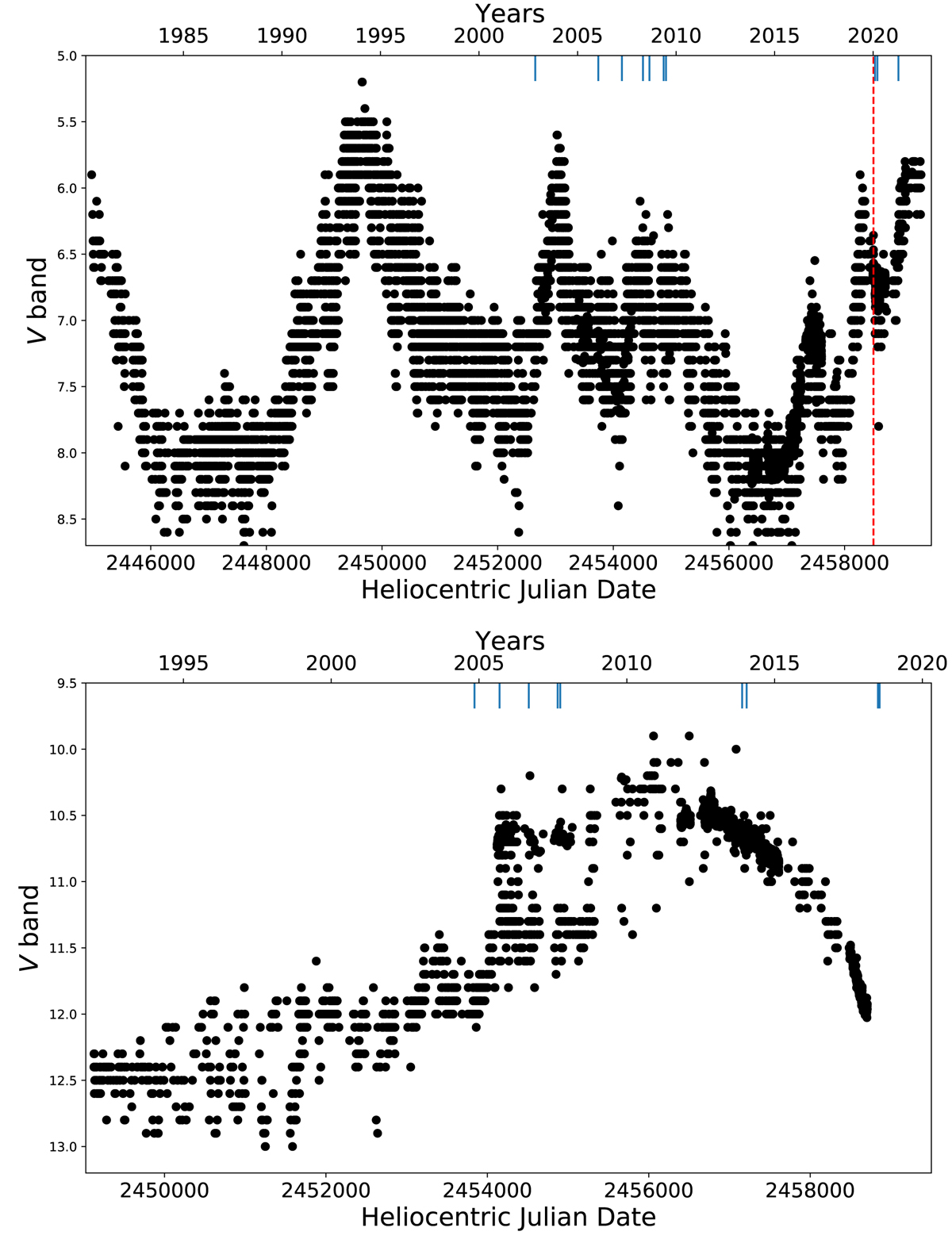