The existence of massive galaxies lacking a classical bulge has often been proposed as a challenge to ΛCDM. However, recent simulations propose that a fraction of massive disc galaxies might have had very quiescent merger histories, and also that mergers do not necessarily build classical bulges. We test these ideas with deep MUSE observations of NGC 5746, a massive (~1011 M⊙) edge-on disc galaxy with no classical bulge. We analyse its stellar kinematics and stellar populations, and infer that a massive and extended disc formed very early: 80 per cent of the galaxy's stellar mass formed more than 10 Gyr ago. Most of the thick disc and the bar formed during that early phase. The bar drove gas towards the centre and triggered the formation of the nuclear disc followed by the growth of a boxy/peanut-shaped bulge. Around ~8 Gyr ago, a ~1:10 merger happened, possibly on a low-inclination orbit. The satellite did not cause significant vertical heating, did not contribute to the growth of a classical bulge, and did not destroy the bar and the nuclear disc. It was however an important event for the galaxy: by depositing its stars throughout the whole galaxy it contributed ~30 per cent of accreted stars to the thick disc. NGC 5746 thus did not completely escape mergers, but the only relatively recent significant merger did not damage the galaxy and did not create a classical bulge. Future observations will reveal if this is representative of the formation histories of massive disc galaxies. 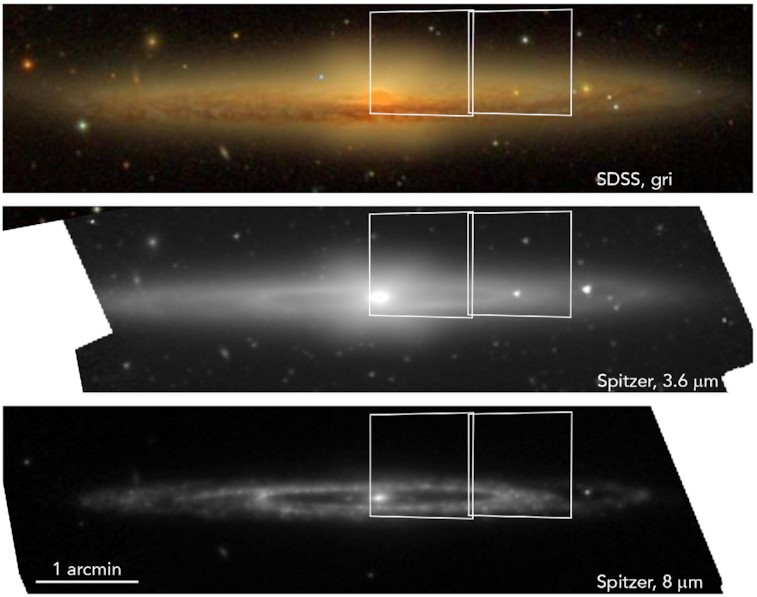