We present the radial gas-phase, mass-weighted metallicity profiles and gradients of the TNG50 star-forming galaxy population measured at redshifts z = 0-3. We investigate the redshift evolution of gradients and examine relations between gradient (negative) steepness and galaxy properties. We find that TNG50 gradients are predominantly negative at all redshifts, although we observe significant diversity among these negative gradients. We determine that the gradients of all galaxies grow more negative with redshift at a roughly constant rate of approximately $-0.02\ \mathrm{dex\, kpc^{-1}}/\Delta z$. This rate does not vary significantly with galaxy mass. We observe a weak negative correlation between gradient (negative) steepness and galaxy stellar mass at z < 2. However, when we normalize gradients by a characteristic radius defined by the galactic star formation distribution, we find that these normalized gradients do not vary significantly with either stellar mass or redshift. We place our results in the context of previous simulations and show that TNG50 high-redshift gradients are more negative than those of models featuring burstier feedback, which may further highlight high-redshift gradients as important discriminators of galaxy formation models. We also find that z = 0 and z = 0.5 TNG50 gradients are consistent with the gradients observed in galaxies at these redshifts, although the preference for flat gradients observed in redshift z ≳ 1 galaxies is not present in TNG50. If future JWST (James Webb Space Telescope) and ELT (Extremely Large Telescope) observations validate these flat gradients, it may indicate a need for simulation models to implement more powerful radial gas mixing within the ISM (interstellar medium), possibly via turbulence and/or stronger winds. 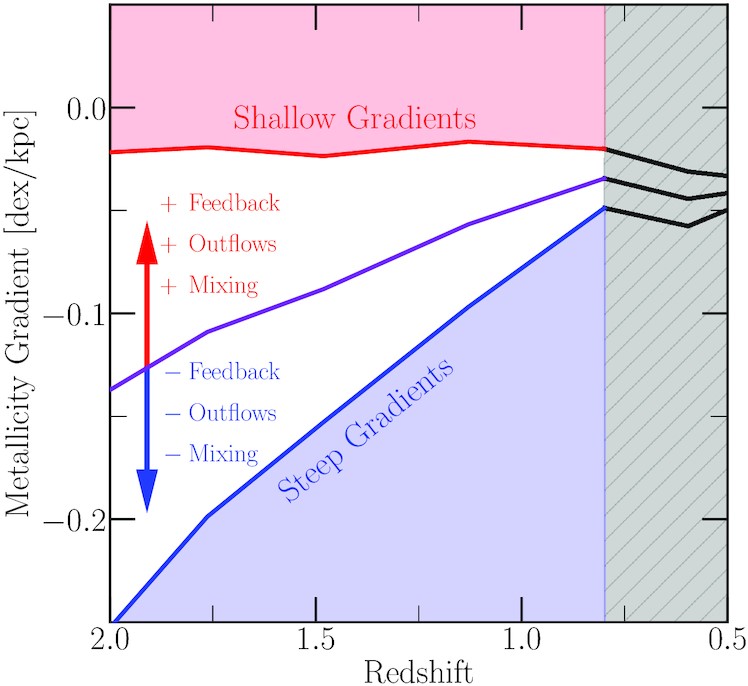