Recent ALMA observations have found many protoplanetary discs with rings that can be explained by gap-opening planets less massive than Jupiter. Meanwhile, recent studies have suggested that protoplanetary discs should have low levels of turbulence. Past computational work on low-viscosity discs has hinted that these two developments might not be self-consistent because even low-mass planets can be accompanied by vortices instead of conventional double rings. We investigate this potential discrepancy by conducting hydrodynamic simulations of growing planetary cores in discs with various aspect ratios (H/r = 0.04, 0.06, 0.08) and viscosities (1.5 × 10-5 ≲ α ≲ 3 × 10-4), having these cores accrete their gas mass directly from the disc. With α < 10-4, we find that sub-Saturn-mass planets in discs with H/r ≤ 0.06 are more likely to be accompanied by dust asymmetries compared to Jupiter-mass planets because they can trigger several generations of vortices in succession. We also find that vortices with H/r = 0.08 survive >6000 planet orbits regardless of the planet mass or disc mass because they are less affected by the planet's spiral waves. We connect our results to observations and find that the outward migration of vortices with H/r ≥ 0.08 may be able to explain the cavity in Oph IRS 48 or the two clumps in MWC 758. Lastly, we show that the lack of observed asymmetries in the disc population in Taurus is unexpected given the long asymmetry lifetimes in our low-viscosity simulations (α ~ 2 × 10-5), a discrepancy we suggest is due to these discs having higher viscosities. 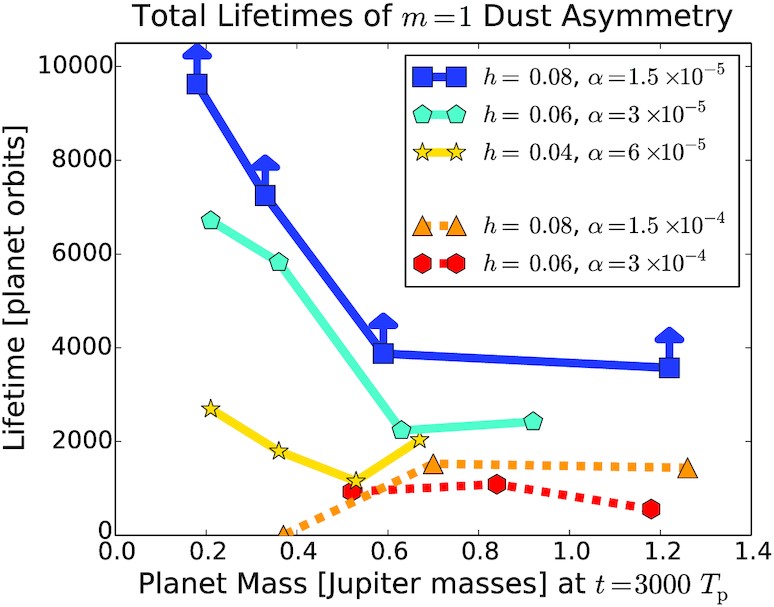