Submillimetre galaxies (SMGs) have long posed a challenge for theorists, and self-consistently reproducing the properties of the SMG population in a large-volume cosmological hydrodynamical simulation has not yet been achieved. We use a scaling relation derived from previous simulations plus radiative transfer calculations to predict the submm flux densities of simulated SMGs drawn from cosmological simulations from the Illustris and IllustrisTNG projects based on the simulated galaxies' star formation rates (SFRs) and dust masses, and compare the predicted number counts with observations. We find that the predicted SMG number counts based on IllustrisTNG are significantly less than observed (more than 1 dex at S850 ≳ 4 mJy). The simulation from the original Illustris project yields more SMGs than IllustrisTNG: the predicted counts are consistent with those observed at both S850 ≲ 5 mJy and S850 ≳ 9 mJy and only a factor of ∼2 lower than those observed at intermediate flux densities. The redshift distribution of SMGs with S850 > 3 mJy in IllustrisTNG is consistent with the observed distribution, whereas the Illustris redshift distribution peaks at significantly lower redshift (1.5 versus 2.8). We demonstrate that IllustrisTNG hosts fewer SMGs than Illustris because in the former, high-mass ( $M_{\star }\sim 10^{11} \, \text{M}_{\odot }$ ) z ∼ 2-3 galaxies have lower dust masses and SFRs than in Illustris owing to differences in the subgrid models for stellar and/or active galactic nucleus feedback between the two simulations (we unfortunately cannot isolate the specific cause(s) post hoc). Our results demonstrate that because our method enables predicting SMG number counts in post-processing with a negligible computational expense, SMGs can provide useful constraints for tuning subgrid models in future large-volume cosmological simulations. 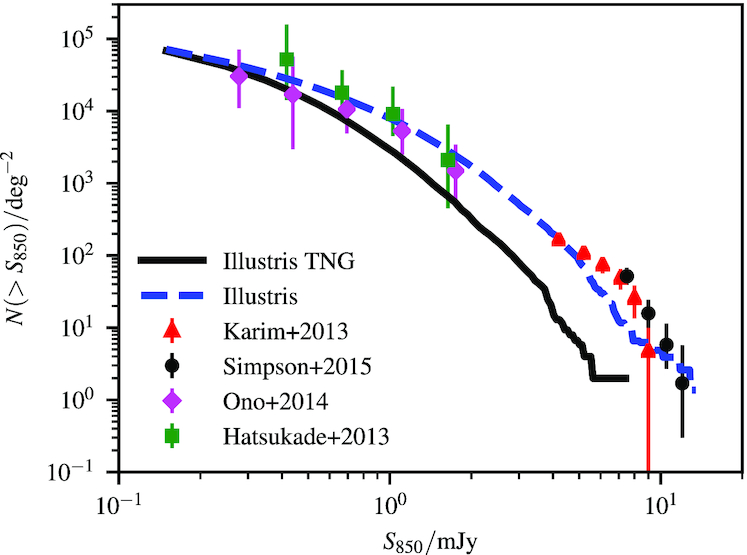