In the standard ΛCDM (Lambda cold dark matter) paradigm, dwarf galaxies are expected to be dark matter-rich, as baryonic feedback is thought to quickly drive gas out of their shallow potential wells and quench star formation at early epochs. Recent observations of local dwarfs with extremely low dark matter content appear to contradict this picture, potentially bringing the validity of the standard model into question. We use NewHorizon, a high-resolution cosmological simulation, to demonstrate that sustained stripping of dark matter, in tidal interactions between a massive galaxy and a dwarf satellite, naturally produces dwarfs that are dark matter-deficient, even though their initial dark matter fractions are normal. The process of dark matter stripping is responsible for the large scatter in the halo-to-stellar mass relation in the dwarf regime. The degree of stripping is driven by the closeness of the orbit of the dwarf around its massive companion and, in extreme cases, produces dwarfs with halo-to-stellar mass ratios as low as unity, consistent with the findings of recent observational studies. ~30 per cent of dwarfs show some deviation from normal dark matter fractions due to dark matter stripping, with 10 per cent showing high levels of dark matter deficiency (Mhalo/M⋆ < 10). Given their close orbits, a significant fraction of dark matter-deficient dwarfs merge with their massive companions (e.g. ~70 per cent merge over time-scales of ~3.5 Gyr), with the dark matter-deficient population being constantly replenished by new interactions between dwarfs and massive companions. The creation of these galaxies is therefore a natural by-product of galaxy evolution and their existence is not in tension with the standard paradigm. 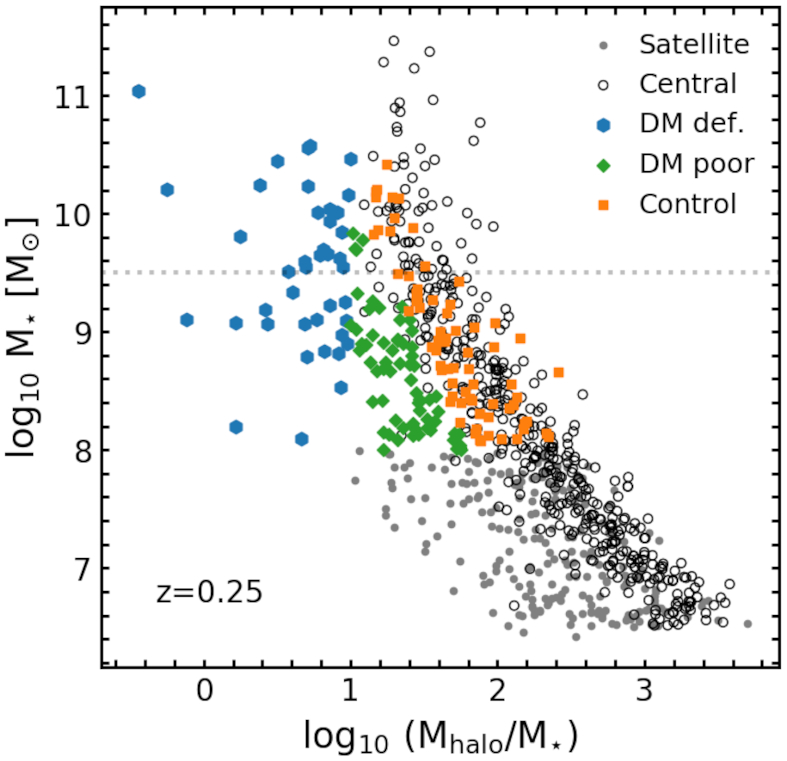