The cosmic origin of carbon, a fundamental building block of life, is still uncertain. Yield predictions for massive stars are almost exclusively based on single-star models, even though a large fraction interact with a binary companion. Using the MESA stellar evolution code, we predict the amount of carbon ejected in the winds and supernovae of single and binary-stripped stars at solar metallicity. We find that binary-stripped stars are twice as efficient at producing carbon (1.5-2.6 times, depending on choices regarding the slope of the initial mass function and black hole formation). We confirm that this is because the convective helium core recedes in stars that have lost their hydrogen envelope, as noted previously. The shrinking of the core disconnects the outermost carbon-rich layers created during the early phase of helium burning from the more central burning regions. The same effect prevents carbon destruction, even when the supernova shock wave passes. The yields are sensitive to the treatment of mixing at convective boundaries, specifically during carbon-shell burning (variations up to 40%), and improving upon this should be a central priority for more reliable yield predictions. The yields are robust (variations less than 0.5%) across our range of explosion assumptions. Black hole formation assumptions are also important, implying that the stellar graveyard now explored by gravitational-wave detections may yield clues to better understand the cosmic carbon production. Our findings also highlight the importance of accounting for binary-stripped stars in chemical yield predictions and motivates further studies of other products of binary interactions. 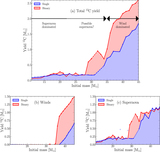