We present an update to the framework called Simulator of Galaxy Millimeter/submillimeter Emission (SÍGAME). SÍGAME derives line emission in the far-infrared (FIR) for galaxies in particle-based cosmological hydrodynamics simulations by applying radiative transfer and physics recipes via a postprocessing step after completion of the simulation. In this version, a new technique is developed to model higher gas densities by parameterizing the probability distribution function (PDF) of the gas density in higher-resolution simulations run with the pseudo-Lagrangian, Voronoi mesh code AREPO. The parameterized PDFs are used as a look-up table, and reach higher densities than in previous work. SÍGAME v3 is tested on redshift z = 0 galaxies drawn from the SIMBA cosmological simulation for eight FIR emission lines tracing vastly different phases of the interstellar medium. This version of SÍGAME includes dust radiative transfer with SKIRT and high-resolution photoionization models with CLOUDY, the latter sampled according to the density PDF of the AREPO simulations to augment the densities in the cosmological simulation. The quartile distributions of the predicted line luminosities overlap with the observed range for nearby galaxies of similar star formation rate (SFR) for all but two emission lines: [O I]63 and CO(3-2), which are overestimated by median factors of 1.3 and 1.0 dex, respectively, compared to the observed line-SFR relation of mixed-type galaxies. We attribute the remaining disagreement with observations to the lack of precise attenuation of the interstellar light on sub-grid scales (≲200 pc) and differences in sample selection. 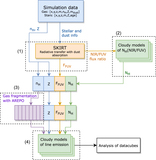