ZFIRE: The Beginning of the End for Massive Galaxies at z 2 and Why Environment Matters

We use ZFIRE and ZFOURGE observations with the spectral energy distribution fitting tool PROSPECTOR to reconstruct the star formation histories (SFHs) of protocluster and field galaxies at z ~ 2 and compare our results to the TNG100 run of the IllustrisTNG cosmological simulation suite. In the observations, we find that massive protocluster galaxies ( $\mathrm{log}[{M}_{* }/{M}_{\odot }]$ > 10.5) form 45% ± 8% of their total stellar mass in the first 2 Gyr of the universe, compared to 31% ± 2% formed in the field galaxies. In both observations and simulations, massive protocluster galaxies have a flat/declining SFH with decreasing redshift compared to rising SFH in their field counterparts. Using IllustrisTNG, we find that massive galaxies ( $\mathrm{log}[{M}_{* }/{M}_{\odot }]\geqslant 10.5$ ) in both environments are on average ≍190 Myr older than low-mass galaxies ( $\mathrm{log}[{M}_{* }/{M}_{\odot }]=9\mbox{--}9.5$ ). However, the difference in mean stellar ages of cluster and field galaxies is minimal when considering the full range in stellar mass ( $\mathrm{log}[{M}_{* }/{M}_{\odot }]\geqslant 9$ ). We explore the role of mergers in driving the SFH in IllustrisTNG and find that massive cluster galaxies consistently experience mergers with low gas fraction compared to other galaxies after 1 Gyr from the big bang. We hypothesize that the low gas fraction in the progenitors of massive cluster galaxies is responsible for the reduced star formation. 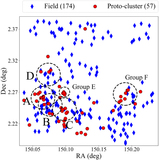