We present the discovery of two nearly identically sized sub-Neptune transiting planets orbiting HD 63935, a bright (V = 8.6 mag), Sun-like (Teff = 5560 K) star at 49 pc. TESS identified the first planet, HD 63935 b (TOI-509.01), in Sectors 7 and 34. We identified the second signal (HD 63935 c) in Keck High Resolution Echelle Spectrometer and Lick Automated Planet Finder radial velocity data as part of our follow-up campaign. It was subsequently confirmed with TESS photometry in Sector 34 as TOI-509.02. Our analysis of the photometric and radial velocity data yielded a robust detection of both planets with periods of 9.0600 ± 0.007 and 21.40 ± 0.0019 days, radii of 2.99 ± 0.14 and 2.90 ± 0.13 R⊕, and masses of 10.8 ± 1.8 and 11.1 ± 2.4 M⊕. We calculated densities for planets b and c consistent with a few percent of the planet mass in hydrogen/helium envelopes. We also describe our survey's efforts to choose the best targets for James Webb Space Telescope atmospheric follow-up. These efforts suggest that HD 63935 b has the most clearly visible atmosphere of its class. It is the best target for transmission spectroscopy (ranked by the transmission spectroscopy metric, a proxy for atmospheric observability) in the so far uncharacterized parameter space comprising sub-Neptune-sized (2.6 R⊕ < Rp < 4 R⊕), moderately irradiated (100 F⊕ < Fp < 1000 F⊕) planets around G stars. Planet c is also a viable target for transmission spectroscopy, and given the indistinguishable masses and radii of the two planets, the system serves as a natural laboratory for examining the processes that shape the evolution of sub-Neptune planets. 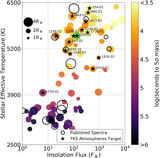