The eclipsing binary ϵ Aur is unique in being a very-long-period binary involving an evolved, variable F star and a suspected B main-sequence star enshrouded in an opaque circumstellar disk. The geometrical arrangement is that the disk is viewed almost perfectly edge on, with the alignment leading to a partial eclipse of the F star. Despite a global observing campaign for the 2009-11 eclipse, there remain outstanding questions about the nature of the binary, its components, the disk, and the evolutionary state of the system. We analyze optical-band polarimetry in conjunction with broadband color variations to interpret brightness variations across the surface of the F star. We model this both during and after the 1982-84 eclipse for which an extensive and dense data set exists. We develop a model in terms of surface temperature variations characterized by a small global variation overlaid with a temperature variation described with low-order spherical harmonics. While not providing a detailed fit to the data set, our modeling captures the overall characterization of the color and polarimetric variability. In particular, we are able to recover the gross behavior of the polarimetric excursion in the Q-U plane as observed during eclipse of the F star when compared to posteclipse behavior. 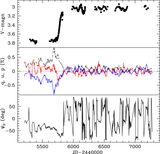