We show that the perturbation at the peak of the light curve of microlensing event KMT-2019-BLG-0371 is explained by a model with a mass ratio between the host star and planet of q ∼ 0.08. Due to the short event duration (tE ∼ 6.5 days), the secondary object in this system could potentially be a massive giant planet. A Bayesian analysis shows that the system most likely consists of a host star with a mass ${M}_{{\rm{h}}}={0.09}_{-0.05}^{+0.14}{M}_{\odot }$ and a massive giant planet with a mass ${M}_{{\rm{p}}}={7.70}_{-3.90}^{+11.34}{M}_{\mathrm{Jup}}$ . However, the interpretation of the secondary as a planet (i.e., as having Mp < 13MJup) rests entirely on the Bayesian analysis. Motivated by this event, we conduct an investigation to determine which constraints meaningfully affect Bayesian analyses for microlensing events. We find that the masses inferred from such a Bayesian analysis are determined almost entirely by the measured value of θE and are relatively insensitive to other factors such as the direction of the event (ℓ, b), the lens-source relative proper motion μrel, or the specific Galactic model prior. 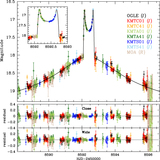