TOI-216 hosts a pair of warm, large exoplanets discovered by the TESS mission. These planets were found to be in or near the 2:1 resonance, and both of them exhibit transit timing variations (TTVs). Precise characterization of the planets' masses and radii, orbital properties, and resonant behavior can test theories for the origins of planets orbiting close to their stars. Previous characterization of the system using the first six sectors of TESS data suffered from a degeneracy between planet mass and orbital eccentricity. Radial-velocity measurements using HARPS, FEROS, and the Planet Finder Spectrograph break that degeneracy, and an expanded TTV baseline from TESS and an ongoing ground-based transit observing campaign increase the precision of the mass and eccentricity measurements. We determine that TOI-216c is a warm Jupiter, TOI-216b is an eccentric warm Neptune, and that they librate in 2:1 resonance with a moderate libration amplitude of ${60}_{-2}^{+2}$ deg, a small but significant free eccentricity of ${0.0222}_{-0.0003}^{+0.0005}$ for TOI-216b, and a small but significant mutual inclination of 1°2-3°9 (95% confidence interval). The libration amplitude, free eccentricity, and mutual inclination imply a disturbance of TOI-216b before or after resonance capture, perhaps by an undetected third planet. 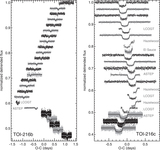