Context. Supernova remnants (SNRs) are commonly thought to be the dominant sources of Galactic cosmic rays up to the knee of the cosmic-ray spectrum at a few PeV. Imaging Atmospheric Cherenkov Telescopes have revealed young SNRs as very-high-energy (VHE, >100 GeV) gamma-ray sources, but for only a few SNRs the hadronic cosmic-ray origin of their gamma-ray emission is indisputably established. In all these cases, the gamma-ray spectra exhibit a spectral cutoff at energies much below 100 TeV and thus do not reach the PeVatron regime.
Aims: The aim of this work was to achieve a firm detection for the oxygen-rich SNR LMC N132D in the VHE gamma-ray domain with an extended set of data, and to clarify the spectral characteristics and the localization of the gamma-ray emission from this exceptionally powerful gamma-ray-emitting SNR.
Methods: We analyzed 252 h of High Energy Stereoscopic System (H.E.S.S.) observations towards SNR N132D that were accumulated between December 2004 and March 2016 during a deep survey of the Large Magellanic Cloud, adding 104 h of observations to the previously published data set to ensure a > 5σ detection. To broaden the gamma-ray spectral coverage required for modeling the spectral energy distribution, an analysis of Fermi-LAT Pass 8 data was also included.
Results: We unambiguously detect N132D at VHE with a significance of 5.7σ. We report the results of a detailed analysis of its spectrum and localization based on the extended H.E.S.S. data set. The joint analysis of the extended H.E.S.S and Fermi-LAT data results in a spectral energy distribution in the energy range from 1.7 GeV to 14.8 TeV, which suggests a high luminosity of N132D at GeV and TeV energies. We set a lower limit on a gamma-ray cutoff energy of 8 TeV with a confidence level of 95%. The new gamma-ray spectrum as well as multiwavelength observations of N132D when compared to physical models suggests a hadronic origin of the VHE gamma-ray emission.
Conclusions: SNR N132D is a VHE gamma-ray source that shows a spectrum extending to the VHE domain without a spectral cutoff at a few TeV, unlike the younger oxygen-rich SNR Cassiopeia A. The gamma-ray emission is best explained by a dominant hadronic component formed by diffusive shock acceleration. The gamma-ray properties of N132D may be affected by an interaction with a nearby molecular cloud that partially lies inside the 95% confidence region of the source position. 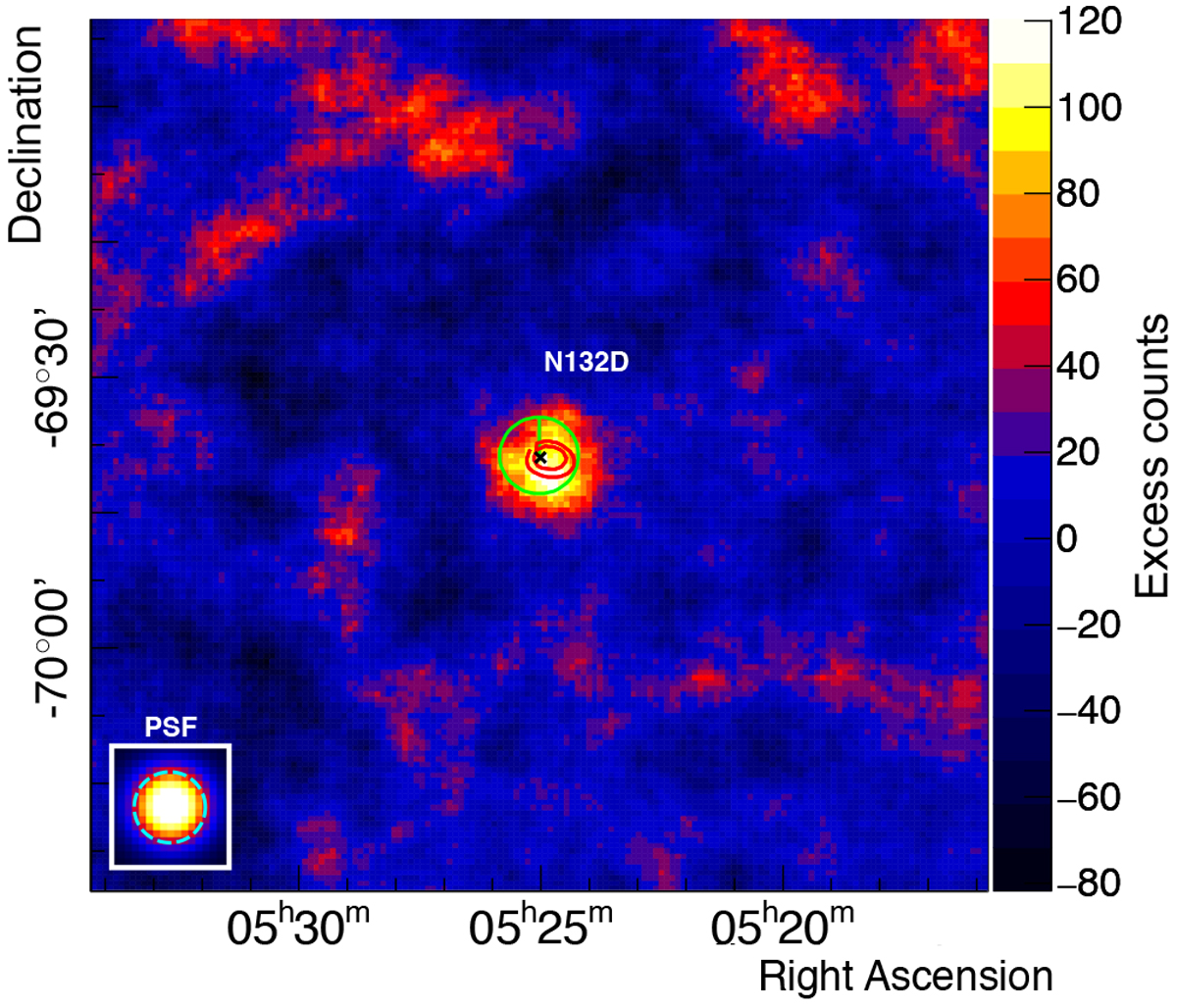