Context. Until recently, the 3D shape, and therefore density (when combining the volume estimate with available mass estimates), and surface topography of the vast majority of the largest (D ≥ 100 km) main-belt asteroids have remained poorly constrained. The improved capabilities of the SPHERE/ZIMPOL instrument have opened new doors into ground-based asteroid exploration.
Aims: To constrain the formation and evolution of a representative sample of large asteroids, we conducted a high-angular-resolution imaging survey of 42 large main-belt asteroids with VLT/SPHERE/ZIMPOL. Our asteroid sample comprises 39 bodies with D ≥ 100 km and in particular most D ≥ 200 km main-belt asteroids (20/23). Furthermore, it nicely reflects the compositional diversity present in the main belt as the sampled bodies belong to the following taxonomic classes: A, B, C, Ch/Cgh, E/M/X, K, P/T, S, and V.
Methods: The SPHERE/ZIMPOL images were first used to reconstruct the 3D shape of all targets with both the ADAM and MPCD reconstruction methods. We subsequently performed a detailed shape analysis and constrained the density of each target using available mass estimates including our own mass estimates in the case of multiple systems.
Results: The analysis of the reconstructed shapes allowed us to identify two families of objects as a function of their diameters, namely "spherical" and "elongated" bodies. A difference in rotation period appears to be the main origin of this bimodality. In addition, all but one object (216 Kleopatra) are located along the Maclaurin sequence with large volatile-rich bodies being the closest to the latter. Our results further reveal that the primaries of most multiple systems possess a rotation period of shorter than 6 h and an elongated shape (c∕a ≤ 0.65). Densities in our sample range from ~1.3 g cm−3 (87 Sylvia) to ~4.3 g cm−3 (22 Kalliope). Furthermore, the density distribution appears to be strongly bimodal with volatile-poor (ρ ≥ 2.7 g cm−3) and volatile-rich (ρ ≤ 2.2 g cm−3) bodies. Finally, our survey along with previous observations provides evidence in support of the possibility that some C-complex bodies could be intrinsically related to IDP-like P- and D-type asteroids, representing different layers of a same body (C: core; P/D: outer shell). We therefore propose that P/ D-types and some C-types may have the same origin in the primordial trans-Neptunian disk.

Tables A.2 and A.3 are only available at the CDS via anonymous ftp to cdsarc.u-strasbg.fr (ftp://130.79.128.5) or via http://cdsarc.u-strasbg.fr/viz-bin/cat/J/A+A/654/A56 Based on observations made with ESO Telescopes at the Paranal Observatory under programme ID 199.C-0074 (PI: P. Vernazza). The reduced and deconvolved images as well as the 3D shape models are available at https://observations.lam.fr/astero/ 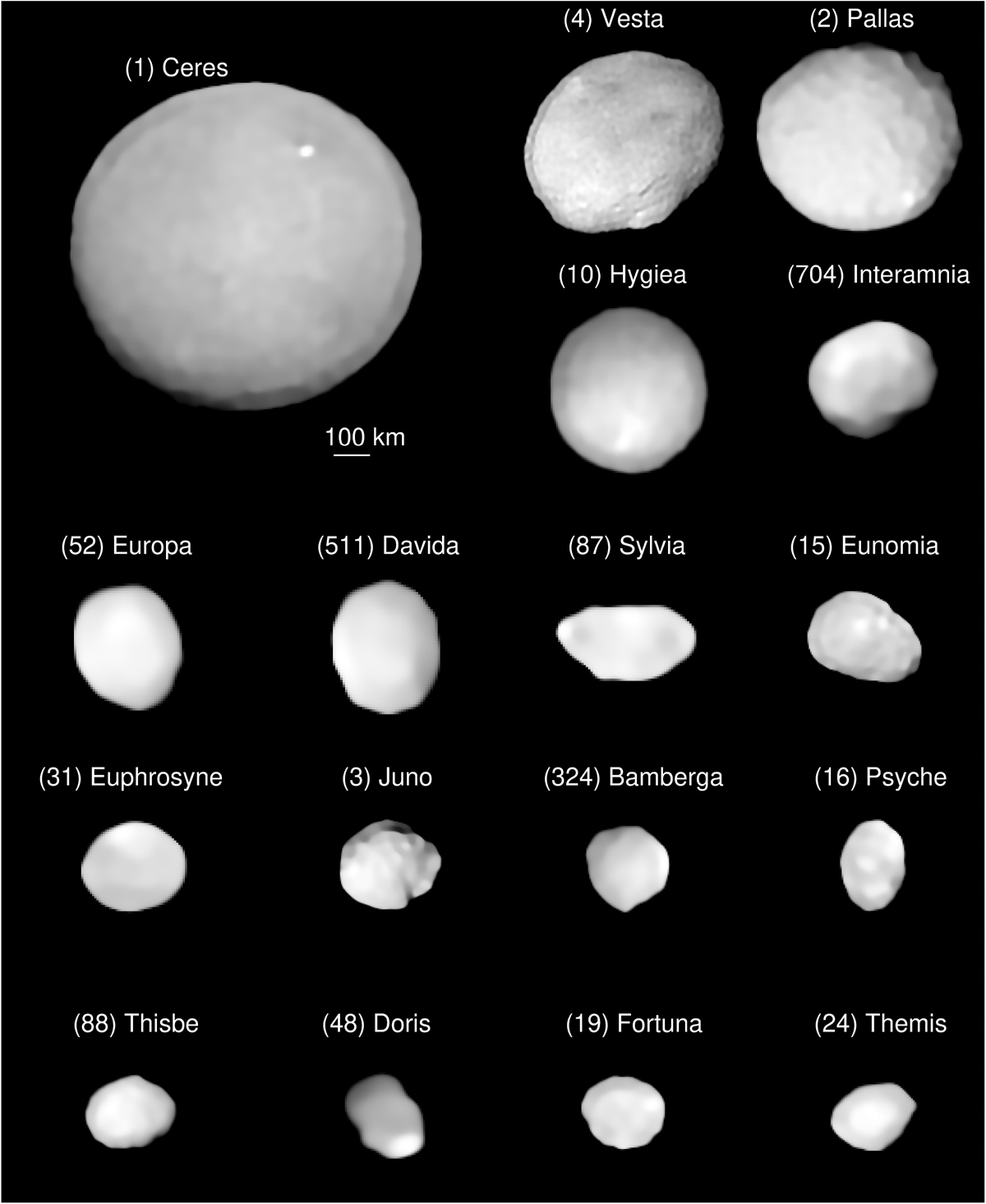