The CARMENES search for exoplanets around M dwarfs. Planet occurrence rates from a subsample of 71 stars

Context. The CARMENES exoplanet survey of M dwarfs has obtained more than 18 000 spectra of 329 nearby M dwarfs over the past five years as part of its guaranteed time observations (GTO) program.
Aims: We determine planet occurrence rates with the 71 stars from the GTO program for which we have more than 50 observations.
Methods: We use injection-and-retrieval experiments on the radial-velocity time series to measure detection probabilities. We include 27 planets in 21 planetary systems in our analysis.
Results: We find 0.06−0.03+0.04 giant planets (100 M⊕ < Mpl sin i < 1000 M⊕) per star in periods of up to 1000 d, but due to a selection bias this number could be up to a factor of five lower in the whole 329-star sample. The upper limit for hot Jupiters (orbital period of less than 10 d) is 0.03 planets per star, while the occurrence rate of planets with intermediate masses (10 M⊕ < Mpl sin i < 100 M⊕) is 0.18−0.05+0.07 planets per star. Less massive planets with 1 M⊕ < Mpl sin i < 10 M⊕ are very abundant, with an estimated rate of 1.32−0.31+0.33 planets per star for periods of up to 100 d. When considering only late M dwarfs with masses M⋆ < 0.34 M⊙, planets more massive than 10 M⊕ become rare. Instead, low-mass planets with periods shorter than 10 d are significantly overabundant.
Conclusions: For orbital periods shorter than 100 d, our results confirm the known stellar mass dependences from the Kepler survey: M dwarfs host fewer giant planets and at least two times more planets with Mpl sin i < 10 M⊕ than G-type stars. In contrast to previous results, planets around our sample of very low-mass stars have a higher occurrence rate in short-period orbits of less than 10 d. Our results demonstrate the need to take into account host star masses in planet formation models. 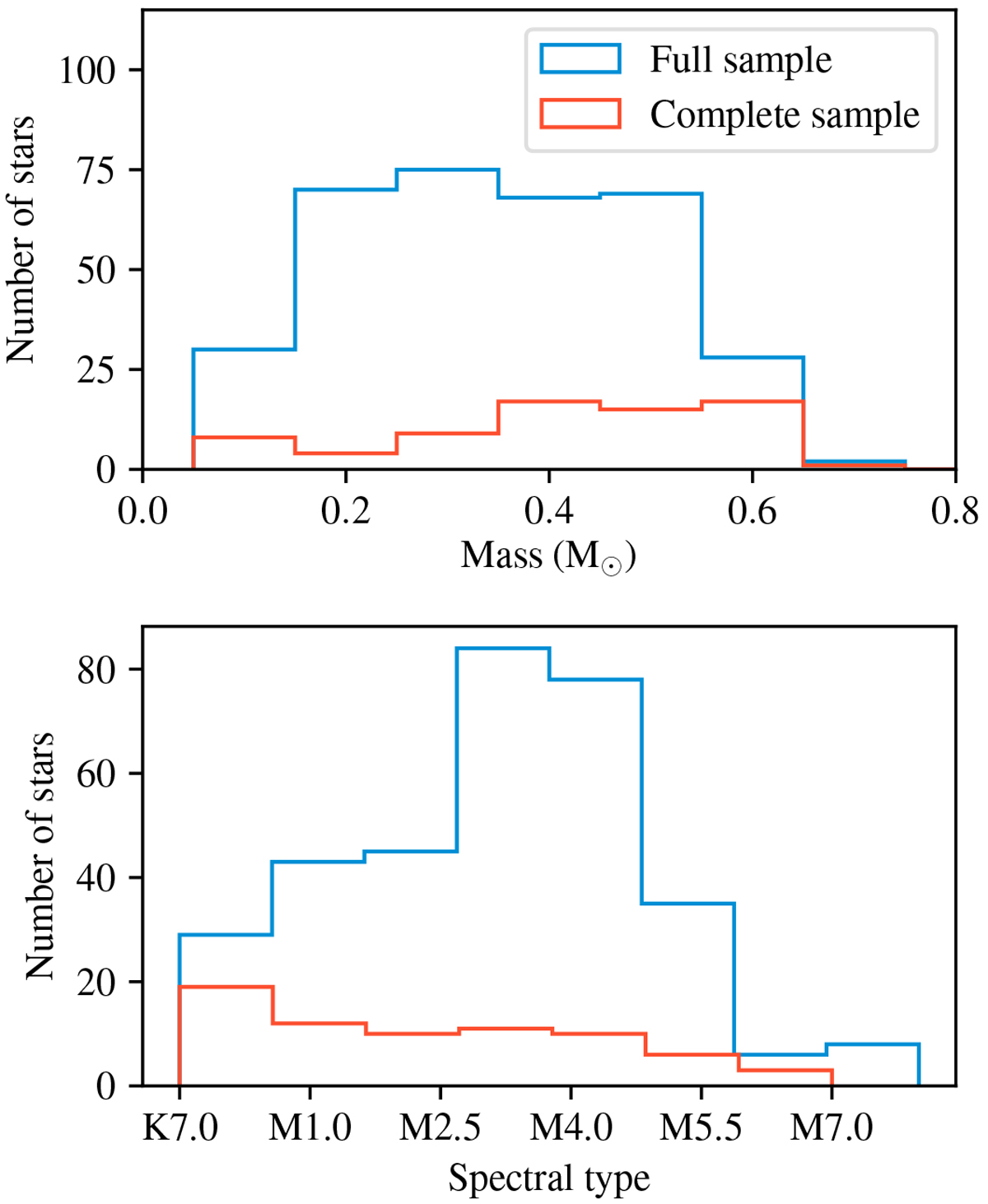