Oort cloud Ecology. II. the chronology of the formation of the Oort cloud

Jan Hendrik Oort hypothesized the existence of a distant cloud of cometary objects that orbit the Sun based on a spike in the reciprocal orbital separation at 1∕a ≲ 10−4 au−1. The Oort cloud is the source of long-period comets, but has not been observed directly, and its origin remains theoretical. Theories on its origin evoke a sequence of events that have been tested individually but never as a consistent chronology. We present a chronology of the formation and early evolution of the Oort cloud, and test the sequence of events by simulating the formation process in subsequent amalgamated steps. These simulations start with the Solar System being born with planets and asteroids in a stellar cluster orbiting the Galactic center. Upon ejection from its birth environment, we continue to follow the evolution of the Solar System while it navigates the Galaxy as an isolated planetary system. We conclude that the range in semi-major axis between ~100 au and several ~103 au still bears the signatures of the Sun being born in a ≳1000 M⊙ pc−3 star cluster, and that most of the outer Oort cloud formed after the Solar System was ejected. The ejection of the Solar System, we argue, happened between ~20 Myr and 50 Myr after its birth. Trailing and leading trails of asteroids and comets along the Sun's orbit in the Galactic potential are the by-product of the formation of the Oort cloud. These arms are composed of material that became unbound from the Solar System when the Oort cloud formed. Today, the bulk of the material in the Oort cloud (~70%) originates from the region in the circumstellar disk that was located between ~15 au and ~35 au, near the current location of the ice giants and the Centaur family of asteroids. According to our simulations, this population is eradicated if the ice-giant planets are born in orbital resonance. Planet migration or chaotic orbital reorganization occurring while the Solar System is still a cluster member is, according to our model, inconsistent with the presence of the Oort cloud. About half the inner Oort cloud, between 100 and 104 au, and a quarter of the material in the outer Oort cloud, ≳104 au, could be non-native to the Solar System but was captured from free-floating debris in the cluster or from the circumstellar disks of other stars in the birth cluster. Characterizing this population will help us to reconstruct the history of the Solar System.

The source code, input files, and simulation data for this manuscript are available at 10.6084/m9.figshare.13214471. A tutorial on how to run the various codes in AMUSE is available at https://github.com/spzwart/AMUSE-Tutorial. 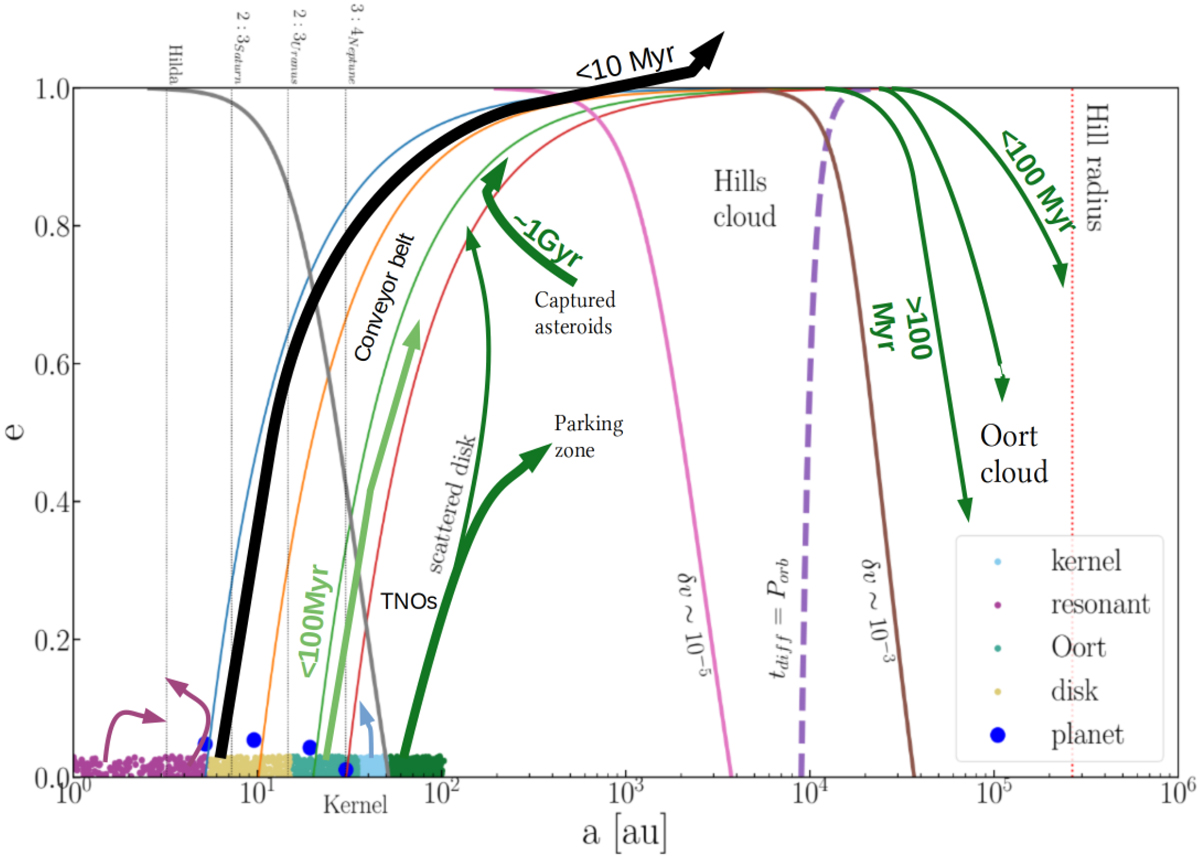