Context. Observations of massive stars in open clusters younger than ∼8 Myr have shown that a majority of them are in binary systems, most of which will interact during their life. While these can be used as a proxy of the initial multiplicity properties, studying populations of massive stars older than ∼20 Myr allows us to probe the outcome of these interactions after a significant number of systems have experienced mass and angular momentum transfer and may even have merged.
Aims: Using multi-epoch integral-field spectroscopy, we aim to investigate the multiplicity properties of the massive-star population in the dense core of the ∼40 Myr old cluster NGC 330 in the Small Magellanic Cloud in order to search for possible imprints of stellar evolution on the multiplicity properties.
Methods: We obtained six epochs of VLT/MUSE observations operated in wide-field mode with the extended wavelength setup and supported by adaptive optics. We extracted spectra and measured radial velocities for stars brighter than mF814W = 19. We identified single-lined spectroscopic binaries through significant RV variability with a peak-to-peak amplitude larger than 20 km s−1. We also identified double-lined spectroscopic binaries, and quantified the observational biases for binary detection. In particular, we took into account that binary systems with similar line strengths are difficult to detect in our data set.
Results: The observed spectroscopic binary fraction among stars brighter than mF814W = 19 (approximately 5.5 M⊙ on the main sequence) is fSBobs = 13.2 ± 2.0%. Considering period and mass ratio ranges from log(P) = 0.15−3.5 (about 1.4 to 3160 d), q = 0.1−1.0, and a representative set of orbital parameter distributions, we find a bias-corrected close binary fraction of fcl = 34−7+8%. This fraction seems to decline for the fainter stars, which indicates either that the close binary fraction drops in the B-type domain, or that the period distribution becomes more heavily weighted toward longer orbital periods. We further find that both fractions vary strongly in different regions of the color-magnitude diagram, which corresponds to different evolutionary stages. This probably reveals the imprint of the binary history of different groups of stars. In particular, we find that the observed spectroscopic binary fraction of Be stars (fSBobs = 2 ± 2%) is significantly lower than that of B-type stars (fSBobs = 9 ± 2%).
Conclusions: We provide the first homogeneous radial velocity study of a large sample of B-type stars at a low metallicity ([Fe/H] ≲ −1.0). The overall bias-corrected close binary fraction (log(P) < 3.5 d) of the B-star population in NGC 330 is lower than the fraction reported for younger Galactic and Large Magellanic Cloud clusters in previous works. More data are needed, however, to establish whether the observed differences are caused by an age or a metallicity effect. 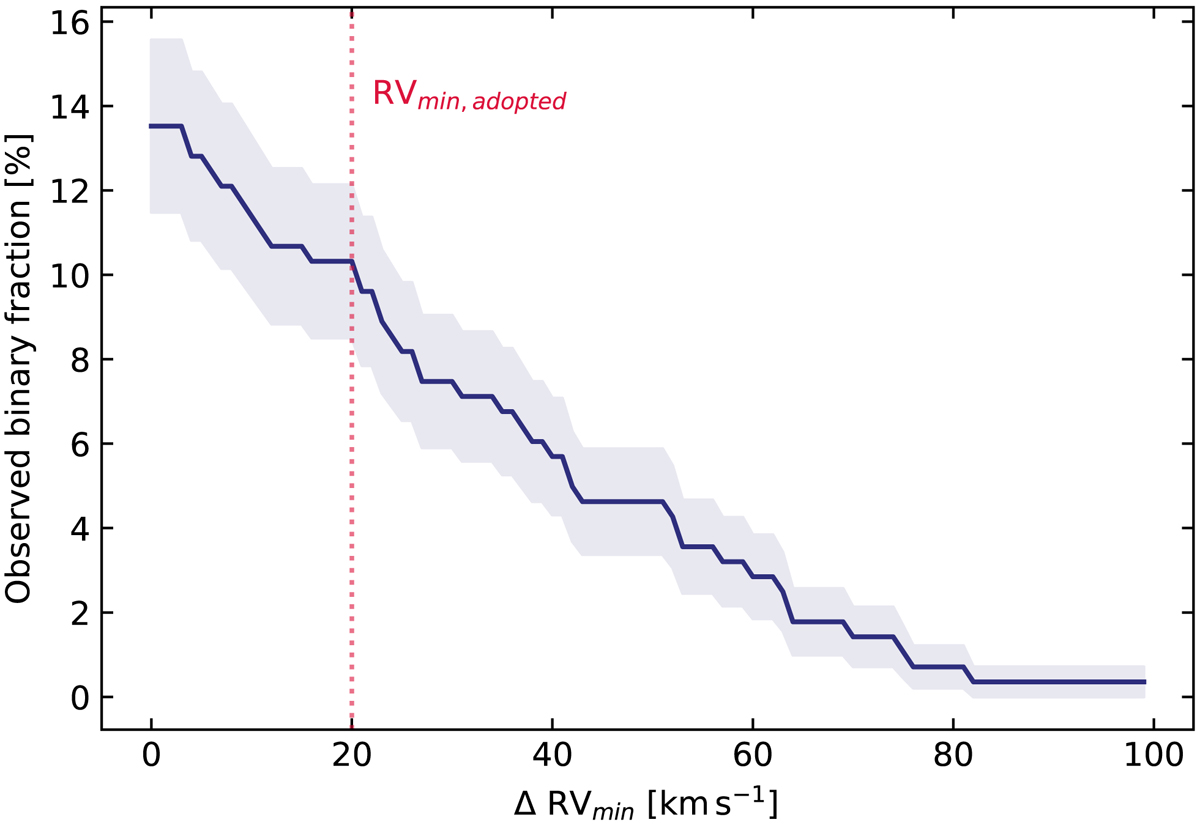