A Virgo Environmental Survey Tracing Ionised Gas Emission (VESTIGE). IX. The effects of ram pressure stripping down to the scale of individual HII regions in the dwarf galaxy IC 3476

We study the IB(s)m galaxy IC 3476 observed in the context of the Virgo Environmental Survey Tracing Ionised Gas Emission (VESTIGE), a blind narrow-band Hα+[NII] imaging survey of the Virgo cluster carried out with MegaCam at the CFHT. The deep narrow-band image reveals a very pertubed ionised gas distribution that is characterised by a prominent banana-shaped structure in the front of the galaxy formed of giant HII regions crossing the stellar disc. Star-forming structures, at ∼8 kpc from the edges of the stellar disc, are also detected in a deep far-ultraviolet ASTROSAT/UVIT image. This particular morphology indicates that the galaxy is undergoing an almost edge-on ram pressure stripping event. The same Hα+[NII] image also shows that the star formation activity is totally quenched in the leading edge of the disc, where the gas has been removed during the interaction with the surrounding medium. The spectral energy distribution fitting analysis of the multi-frequency data indicates that this quenching episode is very recent (∼50 Myr), and roughly corresponds to an increase of the star formation activity by a factor of ∼161% in the inner regions with respect to that expected for secular evolution. The analysis of these data, whose angular resolution enables the study of the induced effects of the perturbation down to the scale of individual HII regions (req ≃ 40 pc), also suggests that the increase of star formation activity is due to the compression of the gas along the stellar disc of the galaxy, which is able to increase its mean electron density and boost the star formation process producing bright HII regions with luminosities up to L(Hα) ≃ 1038 erg s-1. The combined analysis of the VESTIGE data with deep IFU spectroscopy gathered with MUSE and with high spectral resolution Fabry Perot data also indicates that the hydrodynamic interaction has deeply perturbed the velocity field of the ionised gas component while leaving that of the stellar disc unaffected. The comparison of the data with tuned high-resolution hydrodynamic simulations accounting for the different gas phases (atomic, molecular, ionised) consistently indicates that the perturbing event is very recent (50-150 Myr), once again confirming that ram pressure stripping is a violent phenomenon that is able to perturb the evolution of galaxies in rich environments on short timescales.

Narrow-band imaging data used to prepare Fig. 1 are available at the CDS via anonymous ftp to http://cdsarc.u-strasbg.fr (ftp://130.79.128.5) or via http://cdsarc.u-strasbg.fr/viz-bin/cat/J/A+A/646/A139 Based on observations obtained with MegaPrime/MegaCam, a joint project of CFHT and CEA/DAPNIA, at the Canada-French-Hawaii Telescope (CFHT) which is operated by the National Research Council (NRC) of Canada, the Institut National des Sciences de l'Univers of the Centre National de la Recherche Scientifique (CNRS) of France and the University of Hawaii. Based on observations made with ESO Tele- scopes at the La Silla Paranal Observatory under programme ID 095.D-0172. Based on observations collected at the Observatoire de Haute Provence (OHP) (France), operated by the CNRS. 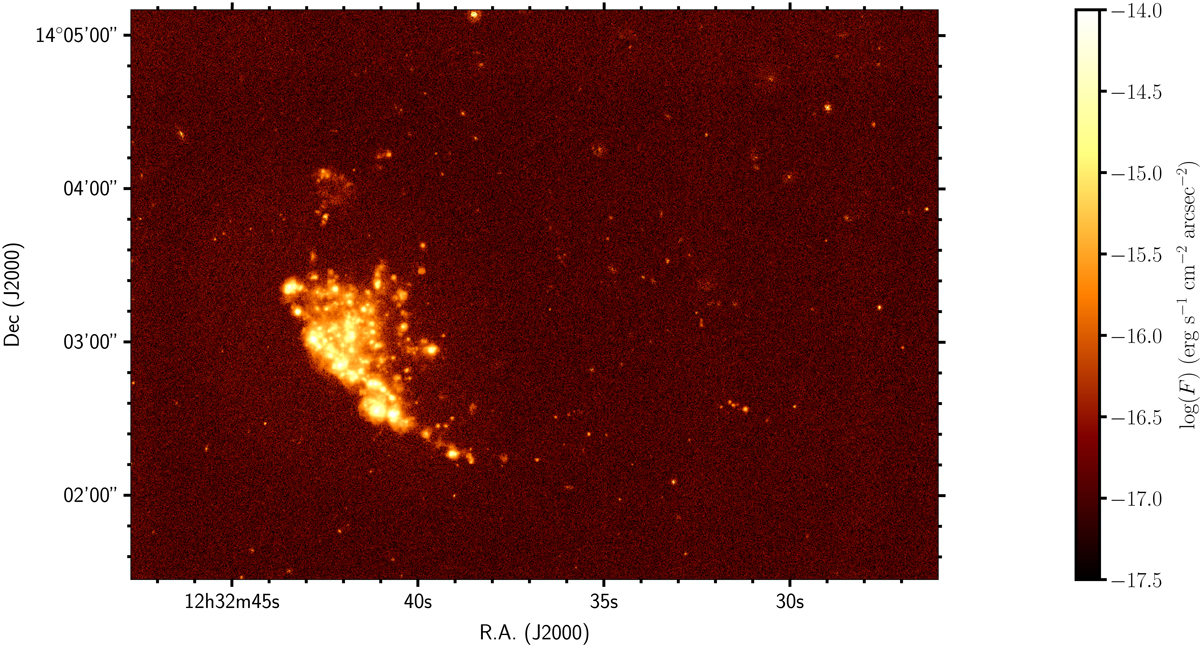