LIStEN: L' band Imaging Survey for Exoplanets in the North

Context. Planetary systems and debris discs are natural by-products of the star formation process, and they affect each other. The direct imaging technique allows simultaneous imaging of both a companion and the circumstellar disc it resides in, and is thus a valuable tool to study companion-disc interactions. However, the number of systems in which a companion and a disc have been detected at the same time remains low.
Aims: Our aim is to increase this sample, and to continue detecting and studying the population of giant planets in wide orbits.
Methods: We carry out the L' band Imaging Survey for Exoplanets in the North (LIStEN), which targeted 28 nearby stars: 24 are known to harbour a debris disc (DD) and the remaining 4 are protoplanetary disc-hosting stars. We aim to detect possible new companions, and study the interactions between the companion and their discs. Angular differential imaging observations were carried out in the L' band at 3.8 μm using the LMIRCam instrument at the LBT, between October 2017 and April 2019.
Results: No new companions were detected. We combined the derived mass detection limits with information on the disc, and on the proper motion of the host star, to constrain the presence of unseen planetary and low-mass stellar companion around the 24 disc-hosting stars in our survey. We find that 2 have an uncertain DD status and the remaining 22 have disc sizes compatible with self-stirring. Three targets show a proper motion anomaly (PMa) compatible with the presence of an unseen companion.
Conclusions: Our achieved mass limits combined with the PMa analysis for HD 113337 support the presence of a second companion around the star, as suggested in previous RV studies. Our mass limits also help to tighten the constraints on the mass and semi-major axis of the unseen companions around HD 161868 and HD 8907.

The LBT is an international collaboration among institutions in the United States, Italy and Germany. LBT Corporation partners are: LBT Beteiligungsgesellschaft, Germany, representing the Max-Planck Society, The Leibniz Institute for Astrophysics Potsdam, and Heidelberg University; the University of Arizona on behalf of the Arizona Board of Regents; Istituto Nazionale di Astrofisica, Italy; The Ohio State University, representing OSU, University of Notre Dame, University of Minnesota and University of Virginia. 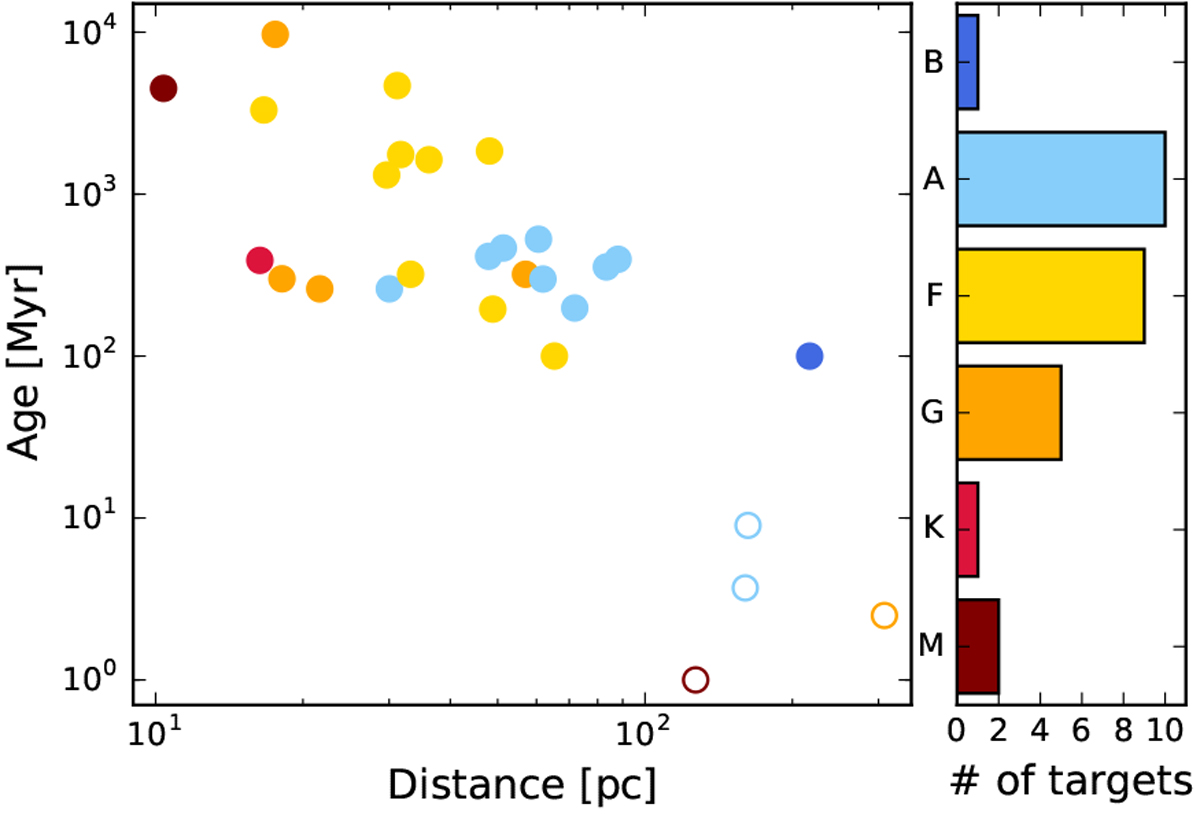