The XMM-RM project was designed to provide X-ray coverage of the Sloan Digital Sky Survey Reverberation Mapping (SDSS-RM) field. Forty-one XMM-Newton exposures, placed surrounding the Chandra AEGIS field, were taken, covering an area of 6.13 deg2 and reaching a nominal exposure depth of ∼15 ks. We present an X-ray catalog of 3553 sources detected in these data, using a PSF-fitting algorithm and a sample selection threshold that produces a ∼5% fraction of spurious sources. In addition to the PSF-fitting likelihood, we calculate a second source reliability measure based on Poisson theory using source and background counts within an aperture. Using the Poissonian likelihood, we select a subsample with a high purity and find that it has number count profiles similar to previous X-ray surveys. The Bayesian method "NWAY" was employed to identify counterparts of the X-ray sources from the optical Legacy and the IR unWISE catalogs, using a two-dimensional unWISE magnitude-color prior created from optical/IR counterparts of Chandra X-ray sources. A significant number of the optical/IR counterparts correspond to sources with low detection likelihoods, proving the value of retaining the low-likelihood detections in the catalog. A total of 932 of the XMM-RM sources are covered by SDSS spectroscopic observations, where 89% of them are classified as active galactic nuclei, and 71% of these active galactic nuclei are in the SDSS-RM quasar catalog. Among the SDSS-RM quasars, 80% are detectable at the depth of the XMM observations. 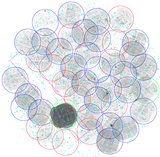